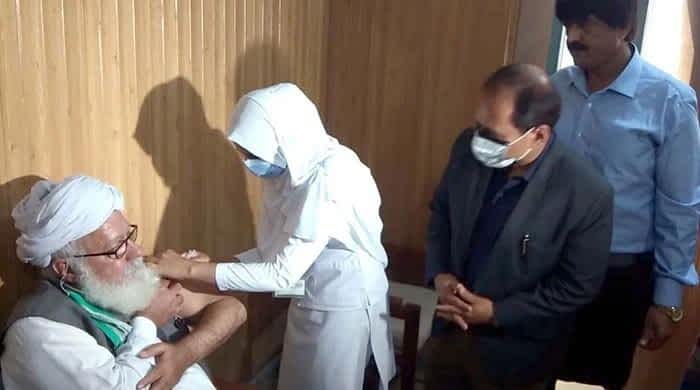 The Sindh cabinet on Tuesday decided to engage private hospitals and laboratories in Covid-19 mass vaccination in the province and to encourage the private health sector to import coronavirus vaccines, allocate human resources and establish vaccination centres, especially in Karachi.

The health department told the cabinet that during the pandemic, the provincial response to the novel coronavirus was characterised by mixed public and private delivery of care. The private health sector played a critical role in providing essential health services, especially when the public sector was so overwhelmed with patients.

On the receipt of the first consignment of the Sinopharm vaccine, the provincial government started its drive to inoculate frontline healthcare workers in the first phase. Recently, the vaccination of 60 plus people has been started, and in the next phase, mass vaccination of all people above 18 will be initiated. This will require the involvement of the private health care sector to shoulder the efforts of the health department to vaccinate every eligible resident of the province.

The chief minister, who chaired the cabinet meeting, said the government must seek the commitment, capability and the capacity of the private sector to import Covid-19 vaccines to fulfil this national duty in the most effective and efficient manner.

The cabinet allowed the health department to engage private hospitals and laboratories in mass vaccination and encourage the private health sector to import Covid-19 vaccines.

The chief minister directed the health department to formulate SOPs for the purpose along with a registration mechanism under the Sindh Health Care Commission so that everything, including vaccine prices, remained under control.

The cabinet was told that the Sindh Public Service Commission (SPSC) had forwarded a list of 958 eligible candidates (male and female) and recommended their appointments as staff nurses in BS-16. After their appointments, the SPSC has sent a list of nine nurses, among whom the Pakistan Nursing Council certificates of six candidates were after the cut-off date, while in case of three others PNC certificates were not attached.

The chief minister directed the health department not to terminate or withdraw their appointment orders, but convert their orders into contracts. The cabinet endorsed the chief minister’s

The cabinet was told that the Letters of Administration and Succession Certificate Bill 2021 duly passed by the assembly in January 2021 was sent to the governor for accord of assent thereto. The governor has returned the bill with some observations.

The governor is of the opinion that if all the legal heirs are required for biometric verification for a succession certificate, it will create problems to the legal heirs living abroad.

The cabinet keeping in view the observations of the governor referred the bill back to the committee for reconsideration.

The local government department requested the cabinet to approve a loan of Rs844.159 million to clear the outstanding dues of Karachi Development Authority (KDA), which would be paid back after auction of KDA plots.

The chief minister said that the KDA, local bodies and market committees were autonomous bodies and they had their established system to pay their salaries, gratuity and pensions to their retiring or retired employees from their resources. He questioned why these bodies had failed to maintain their financial discipline and why off and on they kept requesting the provincial government for grants-in-aid to pay their pensions.

The chief minister asked where their pension fund was and how they had invested and utilised it. The cabinet, keeping in view the questions raised by the chief minister, constituted a committee under Minister for Local Government Syed Nasir Shah. The other members would be Ismail Rahu, Saeed Ghani, Imtiaz Shaikh and Murtaza Wahab.

They would examine the pension funds of the KDA, KMC, DMCs, other local bodies, market committee and such other organisations, how they had invested them and why they had got bogged down in such a serious financial crisis.

The organisations which were overstaffed would also be identified and a proposal for developing a surplus pool would also be submitted so that they could be absorbed somewhere else.

The provincial cabinet in November 2019 had approved the establishment of special courts under the Sindh Building Control Ordinance (SBCO-1979) at divisional headquarters.

The cabinet, with the concurrence of the chief justice of the Sindh High Court, approved the proposal that the sitting district & session judges of districts in Karachi Division, in addition to their own work in their respective districts, would be given powers to exercise the jurisdiction within their territorial limits, as vested with judges of special courts under the Sindh Building Control Ordinance -1979.

The sitting district & session judges at the divisional headquarters of Hyderabad, Sukkur, Shaheed Benazirabad and Mirpurkhas, in addition to their own work, would exercise the jurisdiction within their limits as vested with judges of special courts under SBCO-1979.

The cabinet, on the recommendation of the National Coordination Committee on Housing, Construction and Development to reduce the registration fee on mortgage for low-cost housing projects, approved a reduction in the mortgage fee.

On the request of the health department, the cabinet approved Rs300 million grant-in-aid in favour of Aman Health Care Services for a period of six months, January 2021 to June 2021, for the continuation of operations of the Sindh Rescue and Medical Services.

The Sindh cabinet also directed the health department to get a new company registered so that funding issues could be resolved for good.

The cabinet decided to allot 20 acres of land to the Dawoodi Bohra Community for a graveyard near Gadap at a rate of Rs7.5 million. The Bohra community had requested the chief minister that most of their members had shifted towards the Super Highway; therefore, they may be given a piece of land for a graveyard.

The Sindh cabinet on the request of the army authorities excluded military land from the Karachi Strategic Development Plan (KSDP) 2020. The military land excluded from the KSD includes the 300- acre Race Course Ground, Saddar, Cantt, and 15 acres of military land adjacent to the Capri Cinema.

The cabinet passed a resolution reposing confidence and trust in the Election Commission of Pakistan, its chairman and members and called upon the federal government not to intervene in discharge of the constitutional obligations of the ECP.