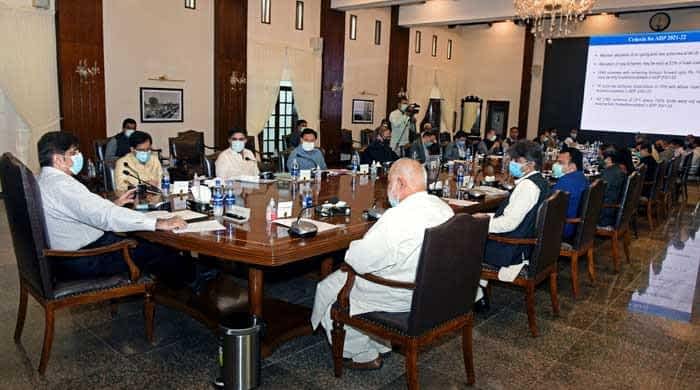 KARACHI: Sindh Chief Minister Murad Ali Shah on Saturday annnounced that his government’s Annual Development Programme (ADP) in the upcoming budget will be welfare-oriented with a special focus on containing the coronavirus pandemic, reviving the economy, reducing poverty, and empowering women.

Shah, who has kept the finance portfolio for himself, made the remarks over a meeting he chaired to finalise the ADP for the financial year 2021-22 at the CM House.

The chief minister, while giving the final touch ups to the next ADP, directed all departments to complete those on-going schemes for which they have received 100% funding.

“The schemes on which 50% funds have been utilised would be given priority for completion in the next budget,” said Shah.

He said that the pandemic has hit the economy hard, therefore poverty has increased.

“We will launch community development programmes to reduce poverty, and relief will be given to small businessmen for revival of their business,” Shah assured the meeting’s participants.

Talking about the upcoming projects, the chief minister said that they would establish infectious disease hospitals in other divisional headquarters as well by allocating funds for it in the upcoming budget.

He said that in the rural areas, apart from development of agriculture sector, schemes would be launched to promote fisheries and livestock development.

Murad directed all the departments to sit with Planning and Development Department to finalise their development priorities so that the portfolio could be finalised for budget 2021-22.

Separately, Murad gave the approval to launch a Rs4 billion Solar Home System (SHS) scheme with the help of the World Bank in 10 districts of the province.

The approval was granted in a meeting of the Energy department chaired by the Sindh CM.

Under the plan 20,000 households would be given SHS in 10 different districts of the province with a 50% subsidy. The recipient would have to pay 50% to the vendor while the remaining amount would be paid by the government.