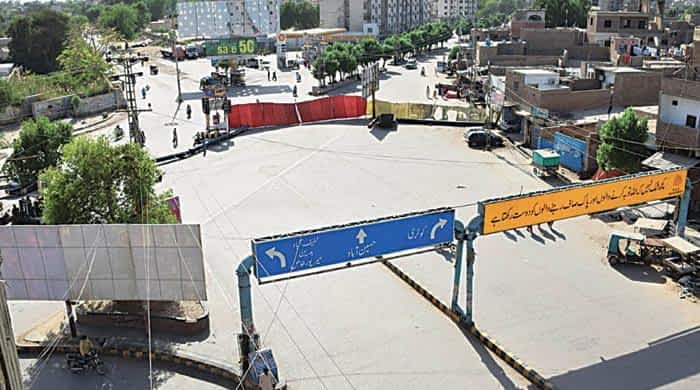 On the recommendations of the Government of Sindh, the provincial home department issued another notification on Tuesday to impose further restrictions on the movement of the public.

The latest notification issued by the home department referred to the meeting of the provincial task force on Covid-19 that was held on Monday at the Chief Minister House. The meeting, which was chaired by CM Syed Murad Ali Shah, observed the rise in the positivity percentage of Covid tests conducted vis-a-vis the rise in cases, and discussed various ways and means to contain the disease.

In view of the task force’s decision and in continuation of the home department’s May 23 order, the provincial government has issued the following orders exercising the powers under Section 3(1) of the Sindh Epidemic Diseases Act 2014 (The Sindh Act VIII of 2015).

Movement of all vehicles will be restricted after 8pm, but will be allowed only for valid reasons and with two persons, including the driver, per vehicle. However, vehicles deployed for emergency and official duties as well as for goods deliveries are exempted.

All kinds of private parties, functions, wedding ceremonies and catering services at homes and other private venues that have more than 10 participants are restricted.

Restaurants and food streets will remain closed, and provide no indoor or outdoor dining services. Only home deliveries, takeaways and drive-throughs are allowed until midnight. A maximum of two persons and vehicles will be allowed to pick up the orders. Restaurants will not deliver food to private gatherings of more than 10 persons.

All parks will remain closed, including walking and jogging tracks. In accordance with the order dated May 23, the commissioners are authorised to issue orders in line with the directions of the home department.

Police barricaded different thoroughfares of Karachi on Tuesday night to enforce the Sindh government’s 8pm curfew decision taken during a meeting of the provincial task force on Covid-19 a day earlier.

At 6pm, the deadline for ending the day’s business, all shops and markets across the city were closed, while most of the thoroughfares witnessed massive traffic jams as commuters seemed to be in a hurry to return home before 8pm.

Police placed barriers on roads and in different areas of the city to restrict unnecessary movement of the public as part of the government’s efforts to stem the transmission of the coronavirus. At the barricades, which served as checkpoints, the police asked people the reason for their being outside, as well as told them to wear face masks if found without them.

People, however, seemed unhappy with the government’s decision. “Only Karachi and Hyderabad are being targeted, as there are no restrictions in the rest of Sindh,” said a citizen. “Last year’s lockdown was bad for Karachiites, and we’re expecting the same this year.”

Karachi Commissioner Navid Shaikh has taken notice of marriage halls across the city allowing wedding ceremonies in violation of the Covid-19 standard operating procedures (SOPs). He directed all the deputy commissioners to take action against such marriage halls.

The commissioner held a meeting with all the deputy commissioners of the city on Tuesday. Representatives of wedding hall associations, owners of catering businesses and restaurant owners also attended the meeting.

“The ban on holding wedding ceremonies in the city should be strictly implemented,” stressed the commissioner. Marriage hall associations’ representatives agreed to cooperate with the Sindh government and the district administrations.

The commissioner also took notice of weddings being held illegally at homes and other private venues in the city. He ordered the deputy commissioners to ensure that such ceremonies do not take place.

He directed them to take strict action against those holding these illegal gatherings. He said that the government order on marriage ceremonies should be strictly implemented across the city.

The meeting also discussed how the Covid-19 SOPs are supposed to be implemented throughout the city and how to control the new wave of the disease.

According to a statement released for the media from the office of the commissioner, the deputy commissioners briefed him on the implementation of the coronavirus SOPs in their respective districts.

The commissioner directed wedding hall associations and caterers not to provide their services for marriage ceremonies being held at homes and other private venues. He asked them to point out such parties and their facilitators to the district administrations.

The wedding hall associations and the caterers’ association assured the commissioner of their support. The meeting was also attended by the Sindh police chief, the assistant commissioner general and other officials.

Action was taken against violators of the Covid-19 SOPs in District South. According to the details shared by Deputy Commissioner Irshad Sodhar’s office, the additional deputy commissioner-I took action against two restaurants in Clifton’s Block-2 and sealed them in the early hours.

The Lyari assistant commissioner sealed three restaurants in the Mauripur area and registered FIRs against six people. All the restaurants were sealed for allowing dine-ins.