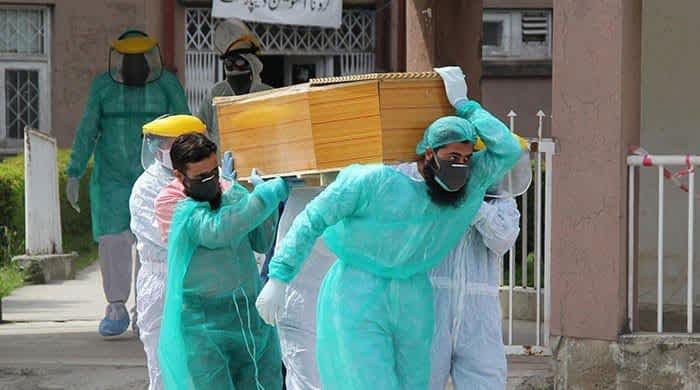 Thirty-three more people have died due to Covid-19 and another 1,374 infections have been reported during the past 24 hours in Sindh, with the death toll due to the viral disease reaching 3,270 in the province. Twenty-six (or 79 per cent) of the latest victims belonged to Karachi.

Chief Minister Syed Murad Ali Shah said in his daily situation report on the health emergency on Thursday that the province had lost 119 people to Covid-19 in October and 331 in November.

He pointed out that with 309 people already dead this month because of the viral disease, the situation was quite painful. He urged everyone to comply with the standard operating procedures. He said that 12,859 samples were tested in the past 24 hours, resulting in 1,374 people, or 11 per cent of those who were screened, being diagnosed with Covid-19.

The provincial government has so far conducted 2,191,706 tests, which have resulted in 201,080 positive cases, which means that 9.2 per cent of those screened have been found to be infected, he added.

Shah said that after the latest deaths, the rate of the diagnosed people who have lost their fight with Covid-19 continues to stand at two per cent. He said that 19,783 patients are currently under treatment: 18,905 in self-isolation at home, 14 at isolation centres and 864 at hospitals, while 761 patients are in critical condition, of whom 73 are on life support.

As for the other districts of the province, Shaheed Benazirabad has reported 36 new cases, Hyderabad 30, Matiari 25, Kashmore 21, Kambar 15, Khairpur 12, Jamshoro, Ghotki and Larkana 10 each, Umerkot nine, Sujawal and Jacobabad eight each, Sukkur and Naushehroferoze seven each, Tando Allahyar and Thatta six each, Mirpurkhas five and Shikarpur three, he added.

The chief executive said that Karachi’s positivity rate of the past 10 days is 19.53 per cent, District Hyderabad’s is 9.51 per cent and the rest of the province’s is 3.98 per cent.

As the second wave of Covid-19 has gained momentum in the province, the CM has been repeatedly urging the people to comply with the standard operating procedures issued by his provincial government and take all the precautionary measures to protect themselves against contracting the infectious disease. Although there are many have started to observe due precautions; however, a large number of people still do not wear masks and follow other SOPs.

Coronavirus and Vitamin D: Is there hope for immunity with the supplement?