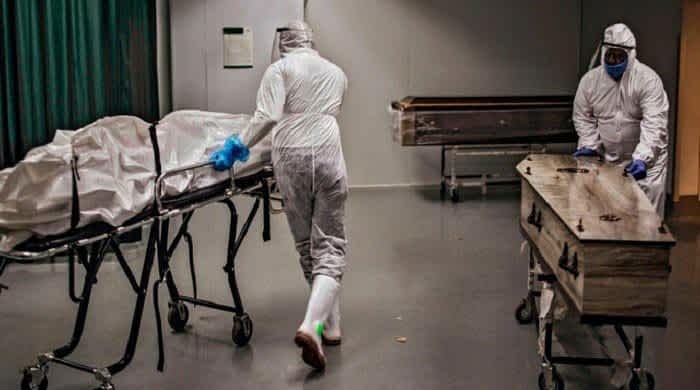 The novel coronavirus has claimed 32 more lives in Sindh, with the majority of deaths occurring at health facilities in Karachi, during the last 24, raising the death toll to 3,302 in the province.

As many as 1,903 more people tested positive for the infectious disease when 20,681 tests were conducted, the highest number of tests conducted in a single day, raising the number of positive cases in Sindh to 202,983, Chief Minister Syed Murad Ali Shah said in his daily Covid-19 situation report on Friday.

He said the fatality rate dropped to 1.6 per cent in Sindh with 32 deaths overnight despite the growing number of deaths on a daily basis, adding that the national fatality rate stood at two per cent, while the global rate of 2.23 per cent.

He noted that 20,681 samples, the highest ever, were tested and 1,903 people were diagnosed with the disease, which constituted a 9.2 per cent detection rate over the past 24 hours.

The chief minister said that currently 2,081 patients are under treatment. Of them 19,970 were in home isolation, 14 at isolation centres and 831 in different hospitals, he added. The condition of 734 patients was stated to be critical, including 71 those on ventilators.

The chief minister urged the people across Sindh to follow the government’s standard operating procedures to remain safe and protected from the pandemic and other infectious diseases.

According to the East Deputy Commissioner Office, a smart mini-lockdown has been imposed in the Gulshan-e-Iqbal and Jamshed Town subdivisions for two weeks.

Areas in the lockdown include Civic Centre, Esa Nagri, Dalmia, PIB Colony, Pehalwan Goth and Safoora Goth. The smart mini-lockdown was imposed on recommendations of the district health officer of District East regarding micro hotspots of the spread of Covid-19.

The lockdown will end on December 31 and it will be in force daily till 7pm under powers conferred by the Sindh Epidemic Diseases Act, 2014.

Anyone entering or exiting the lockdown areas shall wear a mask and movement of people residing in the lockdown areas shall be strictly restricted. Only grocery shops, convenience stores and pharmacies shall be allowed to remain open during specific timings as specified in the home department’s order. All other business activities shall strictly remain closed without any exceptions. Moreover, all kind of industrial units falling in the areas shall remain closed and no home delivery or takeaway of any sort will be allowed from restaurants. Only one person from each household shall be allowed to go outside for buying food items and medicines by displaying their original CNIC to law enforcement agencies.