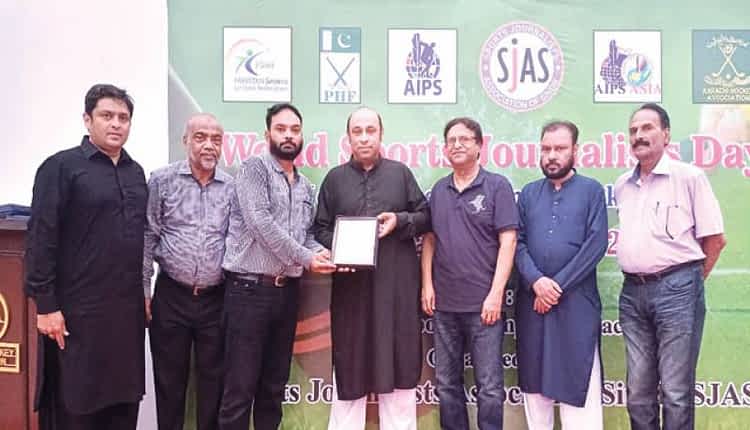 KARACHI -The Sports Journalists Assoc­iation of Sindh (SJAS) held a hockey reporting workshop at the Karachi Hockey Academy (KHA) recently to mark the Sports Journalists Day.   Addressing the occasion, former hockey captain Hanif Khan said that a player or organiser could not dodge a journalist with proper homework and acknowledged that a sports journalist plays a major role in an athlete’s growth. Hanif also paid tribute to SJAS for organising the event on national sports on such important day. Former captain of national junior team Kashif Jawad imparted knowledge of five-a-side format to journalists. He said that in the past, lack of knowledge about regulations has cost Pakistan some games. “This format, of two halves of 10-minute each, is getting popularity worldwide and the Pakistan Hockey Federation is also working on a roadmap for this format’s promotion,” he said. PHF coordinator and KHA Secretary Haider Hussain gave credit to SJAS for the betterment of KHA and hoped that this bond will go for strength to strength. Riazuddin, Rashid Aziz, Syed Nasar Iqbal, Mehmood Riaz, Maqsood Ahmed, Nadira Mushtaq and Jaffar Hussain also imparted their knowledge about reporting and news packaging. The workshop was attended by large numbers of SJAS members. SJAS president M Asif Khan said knowledge of laws further enhances the reporting standard. SJAS Secretary Asghar Azeem said since inception, SJAS has been fulfilling its role of imparting knowledge.

Petrol price increases by Rs5.40 per litre in Pakistan