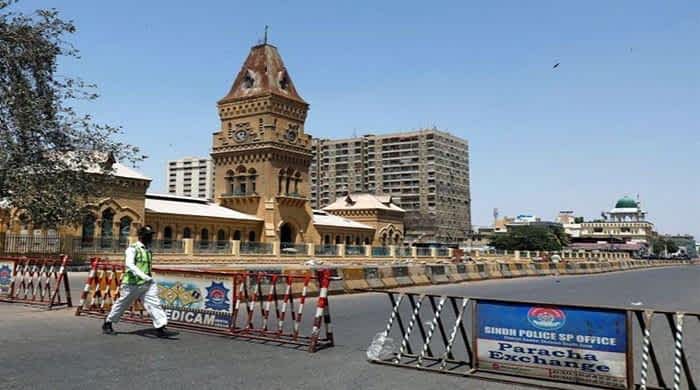 District South Deputy Commissioner Irshad Ali Sodhar visited the Dolmen Mall in Clifton on Saturday to inspect the implementation of the Covid-19 standard operating procedures (SOPs) there and ordered sealing off the shops found to be in violation of the rules.

He ordered sealing off Sindbad’s Xtreme, A Moosajee Sons and Madras Jewellers, fined Next and asked the restaurant staff members to wear masks. He also met the representatives of the Gulf Shopping Centre Association and directed them to ensure compliance with the SOPs.

Meanwhile, the district administrations of Karachi have imposed smart and micro lockdowns in different parts of the city as the second wave of Covid-19 appears to have gained momentum across Pakistan.

Exercising the powers conferred to him under Section 3 of the Sindh Epidemic Diseases Act 2014, District Central Deputy Commissioner Dr Raja Dharejo has imposed “discrete smart lockdown and micro-smart lockdown, which will be enforced in the streets and houses of specified areas”.

According to the notification, the lockdowns will stay in effect until December 4, during which time 26 areas of the district will remain closed. They include several areas of Gulberg Town, North Nazimabad Town, Firdous Colony, Nazimabad and New Karachi.

The administration of District East, which has arguably the highest number of active cases in the entire city with 992 residents who are still infected, has also sealed a large number of areas.

In District South, micro-smart lockdown has been imposed in streets and localities of specific areas of the Civil Lines sub-division until the number of active cases comes down to zero.

The Civil Lines assistant commissioner has been tasked with providing logistic support to implement the lockdown in close coordination with the Sindh Health Department and the law enforcement agencies.

The assistant commissioner has also been directed to ensure a proper lockdown security plan in coordination with the respective superintendent of police. He has also been told to take the South District Municipal Corporation municipal commissioner, the union councils, the members of the peace committee and philanthropists of the locality on board.

As for District West, Gadap Town and a few houses in Surjani Town and Gulshan-e-Maymar have been sealed. The Manghopir assistant commissioner has been tasked with providing logistic support to implement the lockdown in close coordination with the health department and the law enforcement agencies.

During the smart lockdown, movement of people will be restricted and masks will be mandatory for anyone entering or exiting the hotspot areas. Pillion riding and all kinds of public transport, including ride-hailing services, will also not be allowed to operate in those areas.

Only grocery stores and pharmacies will be allowed to remain open, while only one person from a household can leave their house to buy food or medicines.

All kinds of industrial units falling in these areas will remain closed. No joy riding will be allowed, and residents found out of their houses must have a valid reason for doing so.

The government has been trying to set up mobile dispensaries and mobile utility stores in these areas. All other businesses and industrial units in these areas will remain closed, and there will be no home deliveries or takeaways. No get-together will be allowed as well.

WHO to declare Africa polio-free today