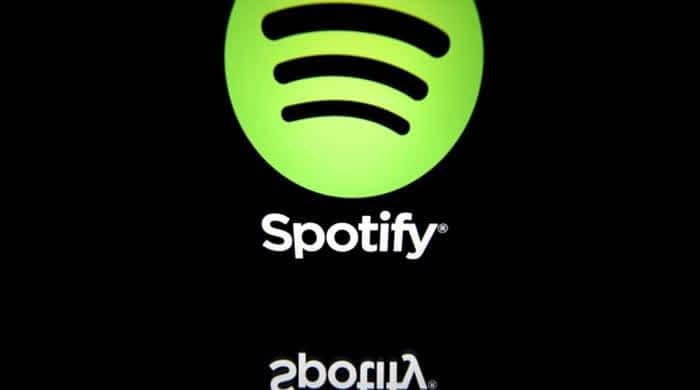 A Spotify logo an be seen in this illustration. — AFP/File

Spotify on Wednesday posted a rare net profit in the first quarter and a sharp increase in paid subscribers as the audio streaming and media services provider launched in dozens of new markets.

The Swedish company netted a modest 23 million euros ($27.8 million) in the first three months of the year — only the fifth quarterly profit since Spotify went public in 2018.

The company attributed the gain to a recent drop in its stock price which lessened the burden of employee compensation — social charges were some 35 million euros lower than forecast as they include share-based payments to staff.

After reaching an all-time high of nearly $365 in mid-February, Spotify’s share on the New York Stock Exchange has fallen below $300 in recent weeks.

Revenue, meanwhile, rose 16 percent year-on-year to 2.15 billion euros, with 90 percent of that coming from paying subscribers and only a tenth from ads, Spotify said in its quarterly report.

At the end of March, the number of monthly active users reached a total of 356 million, with the number of paying subscribers up by 21 percent to 158 million.

In February, Spotify announced it had launched in more than 80 new countries with a combined population of one billion, including heavily populated nations such as Nigeria, Pakistan and Bangladesh.

These launches brought its presence to the vast majority of the world’s countries — nearly 170.

“We are pleased with the new market contributions, with South Korea being the biggest driver,” the company said.

Spotify has never posted a full-year net profit despite its success in the online music market.

Last year, the firm tripled its net loss to 581 million euros, partly due to a strong share price pushing up its compensation costs.

The music streaming company has invested heavily in podcasts in recent years, including acquiring US publishing platform Megaphone and signing a deal with popular podcast host Joe Rogan.

Spotify said it saw “an all-time high in terms of podcast share of overall platform consumption hours” in March.

In the second quarter, it expects to reach 366 to 373 million monthly active users and 162 to 166 million paying subscribers.

By the end of the year, Spotify said it expected to have between 402 million and 422 million users, of which 172 million to 184 million would be paying subscribers.

Meanwhile, Spotify’s co-founder and chief executive Daniel Ek has garnered attention himself by expressing interest in buying London football club Arsenal, though the Premier League club’s American owner Stan Kroenke has said it is not for sale.

‘Everyone wants to rule over Karachi but not fix its problems’