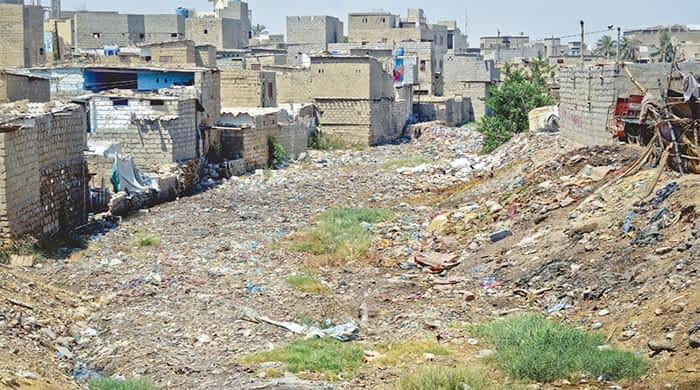 A tribunal on Thursday ordered the authorities concerned to stop demolishing leased houses during the Gujjar Nullah anti-encroachment operation, telling the District Central administration and the Karachi Metropolitan Corporation (KMC) to file their responses within a fortnight.

The presiding officer of the anti-encroachment tribunal, Shakil Ahmed Abbasi, gave the District Central deputy commissioner, the KMC director for anti-encroachment and other respondents until April 8 to submit their comments on the suits filed against them by some residents of the neighbourhoods situated around the storm water drain.

Some 50 locals had moved an application before the tribunal against the officers of the provincial government and the city administration under sections 13 and 14 of the Sindh Public Property (Removal of Encroachment) Act.

Through their attorney Khawaja Altaf, the affected people said that they had built houses in Block 5, Block 18, Block 19 and other areas of Kausar Niazi Colony after obtaining proper lease from the authorities.

They contended that the Sindh Katchi Abadis Authority, the Karachi Development Authority and the KMC had granted them a 99-year lease in respect of the plots in question between the 1970s and 2002, during which they had built their houses after fulfilling all the legal formalities.

Their lawyer said that the officials of the KMC’s Anti-Encroachment Department recently marked certain portions of the houses belonging to his clients, who apprehended that the same were likely to be demolished as part of the ongoing operation to reclaim the banks of Gujjar Nullah.

The counsel contended that no prior notices had been issued to his clients, which was a violation of Section 3 of the removal of encroachment act.

He said that when the plaintiffs had approached the relevant department, the officials refused to share any information in this regard, which was also a violation of Article 19-A of the constitution.

He argued that the defendants’ actions to demolish constructions on the lawfully leased land would amount to violation of Section 11 of the Land Acquisition Act. The attorney pleaded that the tribunal declare the land possessed by the plaintiffs lawfully leased to them by the relevant department. He also requested for a stay against likely demolitions of the houses of the plaintiffs over leased pieces of land.

No housing society to be without trees, says minister

Hailey Bieber reveals how she achieves a glowing complexion before shoot

NA-249 residents being wooed with promises they will get water

Sindh extends ban on wedding functions till May 16

Rangers to be deployed in Lahore