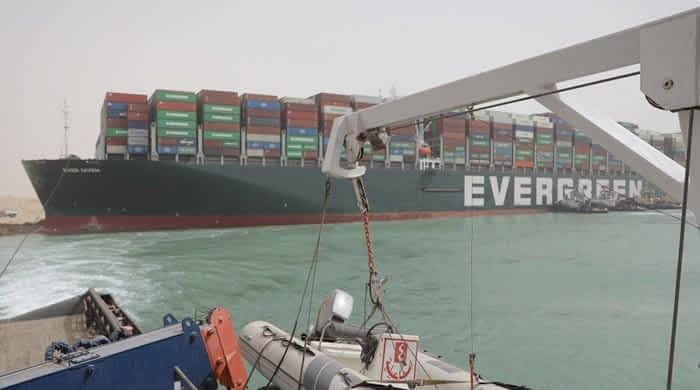 A handout picture released by the Suez Canal Authority on March 25, 2021 shows Egyptian tug boats trying to free Taiwan-owned cargo MV Ever Given (Evergreen), a 400-metre- (1,300-foot-)long and 59-metre wide vessel, lodged sideways and impeding all traffic across the waterway of Egypt´s Suez Canal. Egypt´s Suez Canal Authority said it was “temporarily suspending navigation” until refloating of the MV Ever Given ship was completed on one of the busiest maritime trade routes. — AFP

Egypt Thursday temporarily closed one of the world’s busiest shipping lanes, as the owners of a giant container vessel blocking the Suez Canal said Thursday they faced “extreme difficulty” refloating it.

Salvage experts warned the shut-down could last days or even weeks, potentially forcing businesses to re-route cargo ships around the southern tip of Africa in a blow to global supply networks.

On the third day of the crisis, global shipping giant Maersk and Germany’s Hapag-Lloyd both said they were looking into going around Africa.

The Suez drastically shortens travel between Asia and Europe. The Singapore-Rotterdam route, for example, is 6,000 kilometres (3,700 miles) and up to two weeks shorter via the canal than going around Africa’s Cape of Good Hope.

Egypt’s Suez Canal Authority (SCA) said it was doing all it could to refloat the MV Ever Given, a 400-metre (1,300-foot) long and 200,000 tonne vessel which veered off course and ran aground in a sandstorm on Tuesday.

Tug boats, dredgers and heavy earth-moving equipment have been deployed but so far the ship has not budged.

The salvage company was deploying a team to the site Thursday to assess what it would take to dislodge the Panama-flagged ship, said Berdowski, CEO of its parent company Boskalis.

“We are looking at how much oil it contains, how much water — these are complex calculations,” he said on Dutch TV news programme Nieuwsuur.

“I don’t want to speculate, but it can take days or weeks.”

With ships waiting in both the Mediterranean and Red Sea and in the canal, the SCA announced it was “temporarily suspending navigation” along the waterway.

Japanese ship-leasing firm Shoei Kisen Kaisha, the owner of the giant vessel, said it was facing “extreme difficulty” trying to refloat it.

“We sincerely apologise for causing a great deal of worry to ships in the Suez Canal and those planning to go through the canal,” it said in a statement.

This handout satellite images courtesy of Cnes 2020 released on March 25, 2021 by Airbus DS shows the Taiwan-owned MV ´Ever Given´ (Evergreen) container ship, a 400-metre- (1,300-foot-)long and 59-metre wide vessel, lodged sideways and impeding all traffic across the waterway of Egypt´s Suez Canal. — AFP

A MarineTraffic map showed large clusters of vessels circling as they waited in both the Mediterranean to the north and the Red Sea to the south.

Oil prices had jumped by almost six percent on Wednesday in response to the Suez Canal accident, before dropping again on Thursday.

“What a single vessel can do to the global oil market is remarkable,” said Rystad Energy analyst Bjornar Tonhaugen.

“The stuck vessel in the Suez Canal created the visual definition of a supply route bottleneck, effectively disrupting one of the world’s busiest routes for all commodities.”

“It is likely that the congestion… will take several days or weeks to sort out as it will have a knock-on effect on other convoys.”

Broker Braemar warned that if tug boats are unable to move the giant vessel, some of its cargo might have to be removed by crane barge to refloat it.

“This can take days, maybe weeks,” it said.

The vessel’s managers, Singapore-based Bernhard Schulte Shipmanagement, said the 25 crew aboard were unhurt and the hull and cargo undamaged.

Historic sections of the canal were reopened Wednesday in a bid to ease the congestion.

Nearly 19,000 ships passed through the canal last year carrying more than one billion tonnes of cargo, according to the SCA.

Canal traffic has been disrupted several times in the past, notably during the Arab-Israeli wars of the second half of the 20th century.

It was closed for six months after Egypt nationalised the canal operating company in 1956, prompting an abortive invasion by Britain, France and Israel.

During the Six-Day War of 1967, Egypt imposed a blockade to prevent the canal’s use by Israel which lasted until 1975.

More recently, in 2018, the canal was temporarily closed after a Greek-owned bulk carrier suffered engine failure, triggering a five-ship collision.