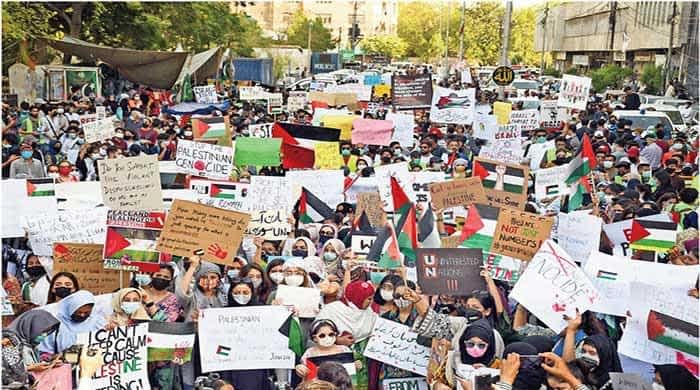 Expressing unwavering solidarity with the Palestinians, hundreds of youths, mainly students, took part in a demonstration on Wednesday to denounce Israel’s continued attacks on Gaza, demanding that the Pakistani government and other world powers intervene to stop the deadly violence.

The protest held outside the Karachi Press Club was joined by hundreds of students and local activists. Later, they marched from the KPC towards Regal Chowk. Carrying Palestinian flags, banners and posters, the protest’s participants raised slogans in favour of Palestine’s liberation and condemning imperialism, colonialism and apartheid.

Civil society activist Jibran Nasir, actors Ayesha Omar, Mahira Khan and other celebrities also attended the protest to show solidarity with the oppressed Palestinians. Commuters on the roads around the KPC and Saddar witnessed a massive traffic jam due to the participation of a large number of people in the protest rally.

In their speeches, the organisers strongly condemned Israel’s atrocities and said innocent Palestinian children and women were dying due to Israel’s attacks. They also said that the so-called world leaders and champions of humanity were now silent over this sheer violation of human rights.

Speakers insisted that supporting the Palestinians was a matter of human rights, not a religious matter, and all human beings should come forward to protest the Israeli attacks. They also stressed that the UN should take “practical steps” to ensure peace in Palestine.

A Jamaat-e-Islami (JI) Karachi delegation, headed by chief Hafiz Naeemur Rehman, called on several prominent religious scholars to invite them to the party’s Palestine March against Israeli brutalities to be taken out on Sunday in the city.

All four religious scholars and leaders appreciated the JI’s initiative and assured it of their full cooperation. They appealed to their circle of influence to participate in the march as a gesture of solidarity with their Palestinian brothers.

The JI delegation also comprised Jamiat Ittehad-e-Ulema Karachi chief Maulana Abdul Waheed, and JI Karachi leaders Birjis Ahmed, Muslim Pervez, Munem Zaffar and Zahid Askari. JI leader Rehman stressed the need for unity among the Muslim world and a show of solidarity with the Palestinian brothers. He said the march would further exert pressure on the government to take practical steps against the Zionist state.

He demanded of the government to take the Muslim bloc on board for a joint military response against Israel.

The JI Karachi announced it would stage the march a day after the party leadership took up the matter of Palestine with President Arif Alvi during a meeting at the president’s residence in Karachi. The JI has also announced it will observe Friday as a protest day against the Israeli atrocities.

A protest rally under the banner of ‘Pakistan for Palestine’ will be organised today (Thursday) from Regal Chowk to the KPC to show solidarity with the Palestinian community and to condemn Israel’s aggression.

The event organizer, Naghma Shaikh, said on Wednesday that the protest was part of a global campaign to spread awareness on mainstream media and social media of the ongoing Nakba happening since 1948 and the infliction of horror upon Palesinenes.

She said the Pakistanis fully supported the Palestinians’ resistance in all forms, and their support for the Palestine cause of liberation was unconditional.