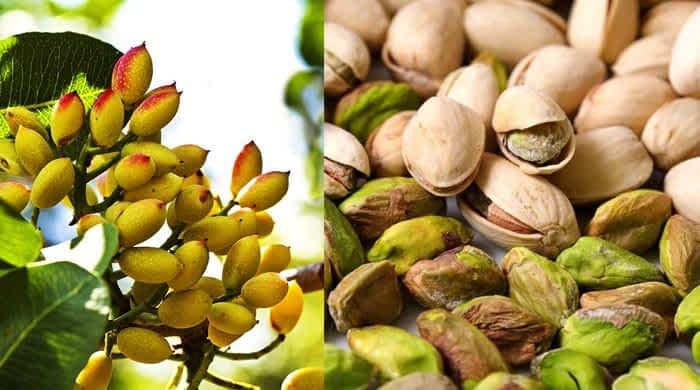 Everyone enjoy eating his/her favorite food, but they absolutely don’t know how this food is grown. We have selected some of your favorites to describe with photos how these are produced or grown.

These grow in clusters on trees. The pistachio tree is a member of the cashew family, is a small tree originating from Central Asia and the Middle East. The tree produces seeds that are widely consumed as food.

The tree usually takes 7-10 years to get significant production with peak production being reached around 20 years.

The food (pistachios) is then dried and dry roasted or processed in machines.

The peanut, also known as the groundnut and the goober is a legume crop grown mainly for its edible seeds.

It is widely grown in the tropics and subtropics, being important to both small and large commercial producers.

The pineapple is a tropical plant with an edible multiple fruit consisting of coalesced berries, also called pineapples.

These come from crazy spikey looking bushes that grow out of the ground. The fruit comes from the middle of the plant.

Pineapples may be cultivated from a crown cutting of the fruit, possibly flowering in five to ten months and fruiting in the following six months.

Kiwifruit or Chinese gooseberry is the edible berry of several species of woody vines in the genus Actinidia. The most common cultivar group of kiwifruit (‘Hayward’) is oval, about the size of a large hen’s egg.

The fruit start out as flowers that hangs on a vine and is grow along trellises. The flower turns into kiwis that hang down until they are ready to be harvested.

The almond is a species of tree native to the Middle East, the Indian subcontinent and North Africa.

Almond is also the name of the edible and widely cultivated seed of this tree.

The fruit of the almond is a drupe, consisting of an outer hull and a hard shell with the seed, which is not a true nut, inside.

Shelling almonds refers to removing the shell to reveal the seed.

Almonds grow off of flowering trees. The little flowers turn into pods and inside those pods are almonds.

The cocoa bean, also called cacao bean, is the dried and fully fermented seed of Theobroma cacao, from which cocoa solids and, because of the seed’s fat, cocoa butter can be extracted.The beans are the basis of chocolate.

Cacao, which is what chocolate is, is grown on a tree that produces giant pods. The cacao beans are found inside these pods.