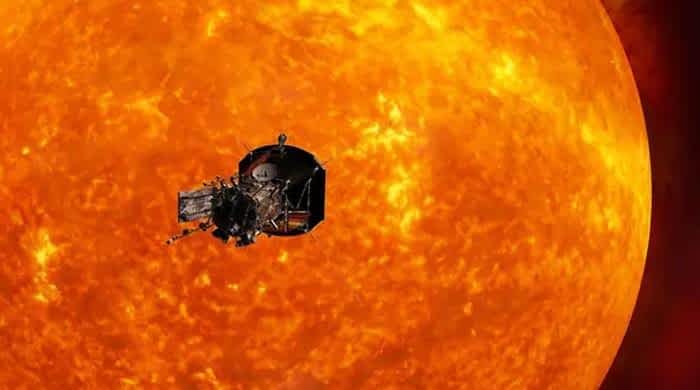 PARIS: NASA´s Parker Solar Probe, having survived its closest encounter so far with the Sun, has sent back a “spectacular trove” of data on its corona, the super-hot outer edge of its atmosphere, scientists said Wednesday.

The car-sized probe, launched in August last year, will come within some four million miles (six million kilometres) of the sun´s surface during a series of fly-bys at other distances and trajectories over seven years.

It is hoped it will allow a better understanding of the solar wind and electromagnetic storms which can cause chaos on Earth by knocking out the power grid.

One puzzle concerns the corona itself which at one million degrees is many times hotter than the sun´s surface at 6,000C, when it would normally be expected to cool the further from the heat source.

“So the corona finds a way to heat up. We are looking at the physical processes which allow that to happen,” said Alexis Rouillard at France´s National Centre for Scientific Research (CNRS) and co-author of one of four reports on the probe´s initial findings published in the journal Nature.

“Even with just these first orbits, we´ve been shocked by how different the corona is when observed up close,” said Justin Kasper, a professor of climate and space sciences and engineering at the University of Michigan.

A summary by the University of Michigan noted that it had been thought that oscillations in the Sun´s magnetic field might have caused the corona to heat up and were expecting to get data to confirm that.

Instead, they reported much more powerful, “rogue” magnetic waves strong enough to switch the direction of the magnetic field completely that may be the energy source for the corona.

Scientists were also surprised by what they found about the acceleration of the solar wind, the outward stream of protons, electrons and other particles emanating from the Sun.

It was known that closer in, the Sun´s magnetic field pulls this wind in the same direction as its rotation, so the team expected this effect would weaken further out.

“To our great surprise, as we neared the Sun, we´ve already detected large rotational flows — 10 to 20 times greater than what standard models of the Sun predict,” Kasper said.

“So we are missing something fundamental about the Sun and how the solar wind escapes.

“This has huge implications. Space weather forecasting will need to account for these flows if we are going to be able to predict whether a coronal mass ejection will strike Earth, or astronauts heading to the Moon or Mars,” he added.

Stuart Bale, professor of physics at the University of California Berkeley, recalled that a “major space weather event” in 1859 blew out telegraph networks on Earth and one in 1972 set off US naval mines in North Vietnam.

With society now even more dependent on sophisticated technology, “big disturbances from the sun are potentially a very serious thing,” Bale said.

“If we could predict space weather, we could shut down or isolate parts of the power grid, or shut down satellite systems that might be vulnerable.”

Nicky Fox, NASA´s project scientist for the probe, told reporters the fact that humanity had flown a spacecraft into the atmosphere of a star was in itself a stunning accomplishment.

“The fact that it´s our nearest star and it has a profound effect on us here on earth is even better, but we´ve waited for decades and decades, to understand these mysteries.”

The probe is named after US solar astrophysicist Eugene Parker who first developed the theory of solar wind, describing a system of magnetic fields, energetic particles and plasmas that make up the phenomenon.