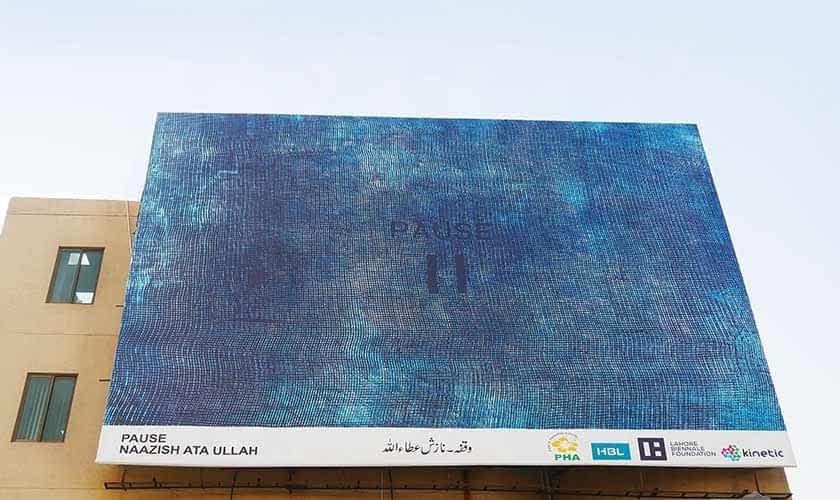 Some unfamiliar billboards are now visible against Lahore’s skyline. Instead of selling a product, or promoting a service, offering new housing opportunities, supporting a political party, advocating a cause or celebrating a hero or leader; these hoardings have no direct message, or no message at all.

These suspended-from-the-sky rectangles advertise something more complex, and sublime: art. A project “initiated by the Lahore Biennale Foundation (LBF) and the Parks and Horticulture Authority (PHA) to exhibit artworks of 16 artists at various locations in Lahore as homage to the city and its citizens”.

Works by these artists (seven created especially for the occasion) were printed on a large scale to fit billboards, and remained on view from November 24 to December 4.

Imagine the reaction of a passer-by, a rider, a driver, a traveller, who happens to set his or her eyes on these huge ‘pictures’ at any hour of the day or the night. These works are different from the routine language of commercials and ads. They neither display a dazzling product, nor a charming model. So, what do they communicate? For example, what does Imran Qureshi’s work say? It has a blood-drenched fabric in the background and the torso of the artist, with a (golden) mask on his face. Another is Salima Hashmi’s A Poem for Zainab, a largely abstract painting with the artist’s mouth stifled behind a piece of cloth. Faiza Butt’s Jester is a portrait of a grimacing man with a snake around his neck and a butterfly on his forehead, in the centre of a stark background. Wardha Shabbir’s Oran-Chard, the orchard against bright orange surface, echoes Indian miniature paintings, particularly of Rajasthan School.

With this project, the LBF has introduced a new version of public art. In the past ‘public art’ was perceived and attempted in diverse ways. In a country, where so-called high art is so marginalised, it is difficult to come to terms with public art as practiced in other societies. Here one needs to redefine (and redeem) terms likw ‘public’ and ‘art’. In a sense, what we see in our midst, in the form of celebratory decorations, transport paintings, wall graffiti, arrangements of flowers, fruits and vegetables at vendors’ stalls, pricey pans and pots lined on a rack in some village house, even arms captured by the police and neatly displayed for the press can be called public art; even though neither the ‘makers’ nor the ‘watchers’ are conscious of all this being art. A number of artists and collectives have tried to bring art to the public realm. By and large, some of these endeavours were for artists rather than for general population. These efforts were mainly for catalogues, grants, etc. Or to contest the elitist pursuit tag for art.

In recent years, the situation has changed remarkably, with Karachi and Lahore having their independent biennales. Unlike Venice Biennale’s regular structures (or Sharjah’s designated quarters), our biennales lack specific locations. So every time the display sites have been shifted, varied, extended, to reach deep into the heart of the city – a feature that has brought art to the public arena.

Now we see a step forward: artworks on billboards are not placed in a historic building, a cultural centre, a park, or even in a congested bazaar. Instead of occupying urban spots, these have assumed the public diction and space. Some of the works, which corresponded to the vocabulary of billboard advertisement were more powerful – and relevant compared to those blown up visuals of orthodox ‘high art’.

Further investigation might reveal that the language of public art is a peculiar one, particularly in commercial hoardings. It grabs your attention with the product, then allures you through its beauty and impresses you by its grandeur. Hence most advertisements – even those selling mundane or local items use English. However, some gadgets from the West prefer to add flavour of the vernacular tongue (in Roman letters).

In this situation, a message written in Urdu text is as far removed from public eye as an abstract imagery reproduced on a large scale. On the other hand, works which incorporated the language of everyday, commented on issues that a vast public could associate with (beyond the city, beyond the country) or were placed at sites that complemented or provided a context. They appeared more effective and lasting (in memory). For instance, Imran Qureshi’s image of him wearing a mask of gold, and the text: ‘Still/Breathing’, refers to survival in contemporary conditions: pandemic, smog, besides echoing George Floyd’s now unforgettable last words. Qureshi used the format of any other commercial hoarding by adding a model (the artist). Yet the expanse of blood at the back and the presence of the mask convey the uncanniness of the visual.

Naazish Ataullah’s Pause had a similarly great impact due to its selective pictorial material. Covered with the texture of a fabric (actually an enlarged print) it has a single word ‘pause’ above its symbol as seen on our digital devices. For its simplicity, and by employing an easily accessed image, the work alluded to the break that the planet had because of Covid-19. When we look back at the year 2020, we realize that the entire period was a pause in our private histories, marked for our struggle to survive. Ataullah’s work, though linked to current conditions, has the potential to survive, because its pictorial elements extend its meaning and relevance.

Some of these billboards, even though not created for specific sites, seemed to be connected with their neighbourhood. For example, installed on a high pole, Ajaz Anwar’s Basant, with its kite filled canvas, gave the illusion/glimpse of a segment of the sky. Likewise, Ali Kazim’s Conference of the Birds, initially a delicate watercolour shown at Karachi Biennale ’02, was on the top of a building. So the birds in flight on the surface did appear to be flying in the air. Atif Khan’s Bridge on the Canal, fixed on a newly-built flyover, connected two bridges: a real location and one from art work. Ruby Chishti’s rags-layered balcony (derived from a traditional Lahori house) was installed in an area known for such architectural detail.

Probably the most spectacular work in this group was by Hamra Abbas. Color was put at a busy crossroads. You started noticing it while driving towards the junction. It was appreciated and enjoyed by most ordinary citizens for its clarity, brilliance and composition. The image, besides being abstract – and rooted in the artist’s previous works (Kaaba Picture as A Misprint) had the potential to attract general public, who might not understand it but admired the expanse of colours. Abbas’s work touches an elementary chord of human psyche, which responds to Kant’s notion of ‘disinterested beauty’, much like when we take pleasure in looking at flowers.

All these colourful fields (like flowerbeds) produced by artists were elevated in mid sky bringing back a line of Pablo Neruda’s poem (quoted by Arundhati Roy in her essay on translation) “In what language does rain fall over tormented cities?”. Roy had another response to the question but after experiencing the LBF project, one could confidently answer: in the language of art.