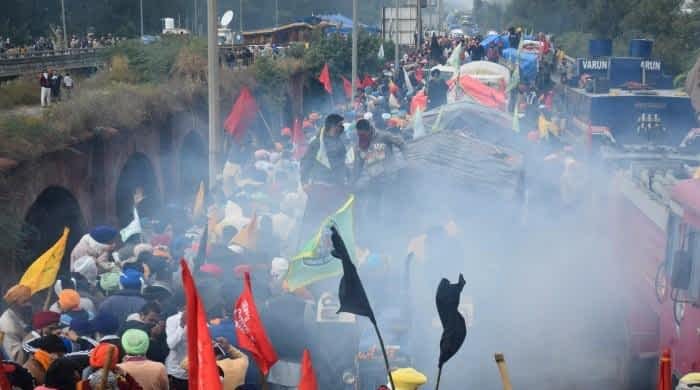 Farmers are seen amid tear gas fired by police to disperse and impede them from marching to Delhi. — AFP/Files

Farmers in India — who are protesting the government’s newly introduced farm laws — will sit with the official representatives for the sixth round of talks next week, NDTV reported.

According to the publication, the development came after today’s meeting between the government and the farmers did not yield any breakthrough on the core issues.

India’s agriculture minister Narendra Singh Tomar, addressing a press conference after the meeting, said that the government would draft a new proposal and discuss it with the farmers.

The publication, terming it the “biggest agitation” for the farmers in recent times, said that despite the Centre’s offers to amend the laws, the farmers are insisting to scrap them.

In India’s biggest farm unrest in years, tens of thousands of growers are protesting on the outskirts of the capital Delhi against the laws seeking to rid the sector of antiquated procurement procedures and allow farmers to sell to institutional buyers and big international retailers.

The farmers, who form a powerful political constituency, fear the laws passed in September could see the government stop buying grains at guaranteed prices, leaving them at the mercy of private buyers.