The anatomy of dress | Art & Culture 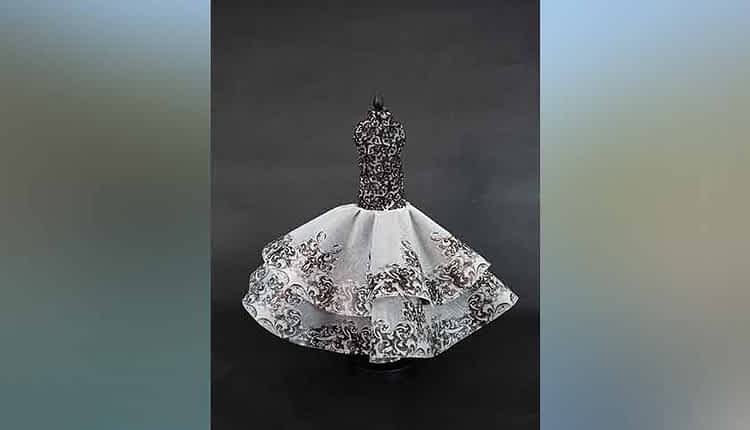 The oneness of being between body and cloth, represents both destination and journey for Bushra Waqas Khan. She skims along the geography of its finished form with an almost hypnotic sense of purpose and ease. She is intrepid, curious, careful. She traces the path of a spiralling seam like some explorer eager to reveal her new rote to the unknown, the unseen. An object demands of an artist an effort to go beyond himself. For clothing is also language, a link between the creator and the onlooker: the asymmetrical hem, soft geometrical forms which float about the body and surround it in tender spaciness.

The Red Carpet, on display at Gallery Khaas Contemporary in Islamabad, dubbed as an ‘invention’ in the modern history of contemporary art, can also be celebrated in the art world as a new form of expression. This spectacular exhibition of apparel fashioned out of fabric, suffused with the attitude of modern art, stimulates our very idea of what art can be. Permeated with enough energy to transform functionality, upend conventional values, and restructure aesthetics, the innovative 3-D handcrafted replicas of dresses are a tour de force. There is just one step, one repetitious, continuous movement of transforming the plane into volume, creating life in the amorphous, installing movement in the still.

What is it that defines the fold, the pleat? The monumental folds of the earth, the painful pleats of the mind, the pleating and folding of paper and the pleats of the body itself? The deep fold of the soul or the surface wrinkle of our skin? An architecture of becoming that is searching for a multiplicity of variations and possibilities while maintaining continuity. This is where material and process collide, overlap and melt like strata of a new and surprising tactility. Where form and detail are only the by-product of the folding into one another, of shapes answering other shapes, of forms echoing other forms.

Bushra Waqas Khan, the artist, is an alchemist and miniature sculpture is her gold. Fire and water, heat and humidity, active and passive involvements: celestial thinking coupled with terrestrial influences represent the alchemist. Khan has chosen the path of transformation and has cut, welded, eroded, twisted and pleated fabrics in order to obtain new dimensions and another way of expressing our age. She does not hesitate to incinerate old ideas, and continues to search, always in doubt, and question, forever in doubt. What follows is the dissolution of rules and preconceived concepts of dress-making in a quest for the weightless and the immaterial. From the elegant loincloth of the pharaohs to the moving dresses of Isadora Duncan, from the iconic sun-pleated dress of Marilyn Monroe to the surprisingly masculine kilt of the Scots, from the peplum of the Greeks to the artistic skills of Alexander Mc Queen, from the beginning of time to the 21st Century, how is it that pleating and folding have always had a connection to genius?

Bushra Khan seems to be motivated by a democratic sense that has enabled her to intuit women’s aspirations to a new modern way of life. She, however, returns to history at the risk of becoming a costumier. It is the moment for the invention of a sartorial solution that has provided her with a contemporary way of thinking. Her research into textiles has served as an approach that liberates movement and develops her talent as a sculptor. The suite of nine evening dresses stands between the classicism evoked by the pleats and the drapery and a frank modernity created by the intervention. A visionary of 3D form, Khan is capable of standing back from its froth and frivolity. She creates outside the frame to root her work in untrammeled possibility. She has, in effect, purified, renewed and reinvented.

To pleat is to diminish, to reduce and to withdraw into a slim column, while to unfold is to increase, to grow, to gain momentum and volume: pleating, unfolding, re-pleating, stitching and pinning in a perpetual movement is almost like breathing and relaxing. A reversible dialogue between the dark and the light, the negative and the positive, vital energies creating tension and creativity.

To pleat is to diminish, to reduce and to withdraw into a slim column, while to unfold is to increase, to grow, to gain momentum and volume: pleating, unfolding, re-pleating, stitching and pinning in a perpetual movement is almost like breathing and relaxing. A reversible dialogue between the dark and the light, the negative and the positive, vital energies creating tension and creativity. A flow from the outside to the inside, where neither is fixed, in a constant exchange. Outlining the body in a variety of geometric forms, designing the body like an abstract expression.

Draping is a means of introducing another more radical concept of time and space within the landscape of object-making: nervously stretched topographical surfaces inhabit three dimensions in an almost independent manner; creating optical illusions that are also extremely tactile. No longer the repetition of sameness but a repetition of differences, transgress borders and customs, east and west, age and gender; adapting to the multiplicity of human identities that change over time, according to seasons and decades, translating flexible moments of cultural metissage.

As Nazish Ataullah explains in her introductory essay in the accompanying catalogue: “Bushra Waqas has been experimenting in multiple ways to deconstruct the official affidavit… or stamp paper that she has used as a material to construct 3D objects. The current body of work is both a critique of patriarchal norms that emerge from the semiotics of the stamp paper to its transformative and gendered trajectory from an affirmation of ownership to its possession as a much-desired object. To further compound its significance, the duality of femininity and fragility realised metaphorically as items of attire, lends the work an intriguing and powerful presence.”

So how did the exuberantly varied designs get printed, in greys, blacks and whites, from sharp geometric patterns to floral motifs on organza, cotton and silk? They are first printed using the inkjet print technology on a heat transfer paper. These are then transferred on fine silk organza or cotton with the help of an industrial transfer technique using metal plates. Individual motifs and finer details are appliqued and stitched on top by professional embroiderers, using Swarovski crystals, as in case of The Magical Gown. Motifs range from moon, stars and Aik Sau Pachaas Rupia to trees, the white tulip and tendrils.

Khan’s work is driven by an unrelenting, abiding optimism: an optimism and incorrigible faith that we associate with modernism. Fabrics and findings are not for her a matter of the usual sources: materials, closures, bondings, and seams are ready to be reinvented by her immense, utopian imagination. In Khan’s work, the response to materials is a touchstone. She uses technology with a transforming ingenuity. Materials of the past are recontextualised and contemporary innovations are explored without prejudice. She never trumps us into enforced hyperbole. There is charm and wit in the clothing. Her irreverence and apostasy spice but never overwhelm a disciplined pragmatism. In a culture that calls attention to minor power and slight skills, Khan’s work always possesses the generous womanliness of a perfect resolution that seeks obscurity, or at most, reserved recognition.

It is important to realise that Bushra Waqas Khan’s critical disbelief is possible only because of the unerring, positive faith of her work. Her work is not fashion in any collective sense. The definite, personal style of hers is never contingent. It possesses art’s condition of being unconditional.