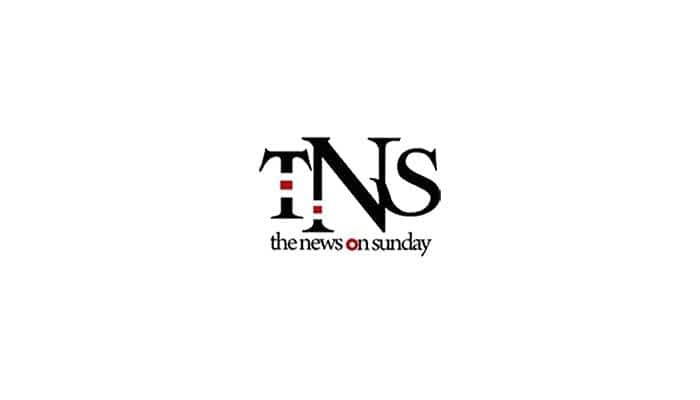 Only a painter has the privilege to remember the initial layers of colours applied to his canvas; what a viewer sees is the final coat of a finished work. That power is also inherent in the process of printmaking, where the image maker prepares a surface: i.e, metal plate, stone, silk screens, wooden block or linoleum sheet, in order to produce a print for public display.

The distance between a plate and a print is the same as a manuscript and a book, though both creative acts take separate, uneven paths (the artist, in most cases, himself prints his imagery, while the writer needs a publishing house to print his words). However, their link, suggests a great, and often missed, similarity. Paper is the final body of their creations.

Paper is prominent in the exhibition, Re-examine/Retrace at the AAN Gandhara Art Space, Karachi. The show, comprising 25 artists (those not known as printmakers), is a printmaking project, conceived by Studio RM and Adeeluz Zafar. The entire show is installed in a pattern different from usual art exhibitions.

Every print is tilted on an angle against the darkness of a wall and illuminated by a beam of light. Seeing these works is not unlike holding a print in your hands as soon it is out of etching or litho press. The exhibition provides a rare opportunity to view a print without glass, cardboard mount and wooden frame, like a book, or a handwritten letter (remember them?)

The reality of paper in a print is clearly evident in some pieces on display. A number of artists have treated their works like a page, from a letter, manuscript, notebook or calligraphy panel.

Naima Dadabhoy, in her Untitled, has replicated a piece of writing on a lined sheet. But the style of inscribing language reflects an obsession – actually the joy of mark-making, because the script – besides being unreadable, is flooded with lines moving in all directions; marks so sensitive they remind one of threads. Her print connects with other works in the exhibition that have thread being a strong element of the imagery, for example, Rehana Mangi’s Memory Lane, comprising the texture of weave with embroidered flowers, along with Adeeluz Zafar’s Teddy, wholly wrapped in gauze.

Writing, as a mode of image making, is an ancient custom, probably since the invention of script. It is still detected in Chinese text. Calligraphy is a merger between the word and the image, exploited in Muzzamil Ruheel’s screen-print, by enlarging skilfully inscribed words (Dastan-i-Hasrat, the title of his print) in a manner that these thick and delicate forms become abstract strokes. Haider Ali Naqvi, too, has explored the potential of written matter: composing a document in longhand – all in white. You sense that like the ink, the content and relevance of these phrases have also been wiped out.

The reality of paper in a print is clearly evident in some pieces on display. A number of artists have treated their works like the page of a letter manuscript, notebook, or calligraphy panel.

Language is not just the shape of letters and words or a sequence of sentences. It is mainly a container of meaning. Words reveal the inner self and reflect outside reality. In Munawar Ali Syed’s Quarantine Diary, our present day conditions are narrated through a web of marks on a page of an English writing exercise book, in which a set of four lines turns into barbed wires. It signifies the awful experience of living under the shadow of death (aptly described by Madiha Hyder in her self-portrait leaving the space for face mask blank – reducing/eliminating a substantial part of our identity). The grim conditions are also a subject for Adeeluz Zafar. A toy in bandages is as shocking a visual as coming across a wounded child.

In commenting on the unbearable weight of existence, these and other artists have acquired a language that is not as boring or painful as life, but is as playful as imagination. For instance, Noman Siddiqui’s Untitled is composed of a sensitive depiction of a donkey near an embossed seal of the State of Pakistan. Our country is not the United States. Donkeys here are the ignorant beasts of burden (not the electoral symbol for the current ruling party in America). In Siddiqui’s relief etching, a donkey is easily translated into masses, messed up by the very government they elect.

One traces our plight nowadays to the times of military dictator, Gen Zia ul Haq. Political resistance finds a metaphor in Imam Hussain’s (with whom Allah was pleased) sacrifice against a tyrant/unjust ruler. RM Naeem, in his Hamsa, alludes to the struggle and celebrates the martyrdom of innocents with drips and drops of red (read blood) around a structure of staircase (read power) next to the Shia emblem of an open hand with names of the five most holy personalities in Islam. They are a perpetually persecuted people, particularly those from Hazara community. What they carry on their shoulders is not a face, but a target. Syed Hussain, belonging to the ethnicity, addresses this issue (crisis) by removing the face from the job ID card of a certain Iqbal Hussain, the artist’s uncle. Occasionally, the circumstances are portrayed through remote symbols, like Zahid Mayo’s print, or more personal and celebratory as in Wardha Shabbir’s print, Two of a Kind, with flora emanating from the heart.

Some other works in the exhibition rely on the excellence of image-making. Prints by Ahsan Jamal and Farhat Ali confirm the craft and vision of makers, who did not use ‘printmaking’ as a tool, but inquired into its history and possibilities. In Jamal’s Men’s Room, three lads are posing for a photograph, but the way the artist has depicted them, says more about the past and the strategy of image making than the identity of the three. In the same lieu, Farhat Ali has constructed a scene from our colonial past, an Indian Raja being visited by mythological characters from the European art history. Ali transcribes a narrative that is not reductive, selective or discriminatory in dealing with the heritage – or racial links of our population. His work, in its intricacy and delicacy echoes European engravings. Both Jamal and Ali have used the medium to express ideas beyond immediate pictorial stuff.

One believes that the exhibition (being held from June 10 to July 10) is an attempt to reassert a method of image-making. However, it is also a means to realise that printmaking is not an extraordinary product but a medium for denoting our life and times. The newspaper article you are holding – is also a form of printmaking.