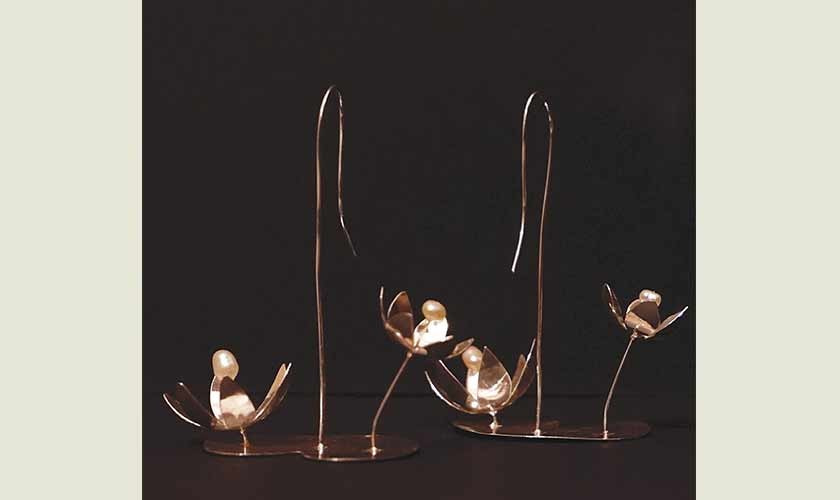 Lotuses in a Pond.

Jewellery is generally associated with jewels, or other precious stones and metals, worn not only to adorn one’s physical beauty and attributes, but also to flaunt wealth and convey a refined taste. In present times, jewellery by and large has become a gender specific artefact. Women wear, adore and possess ornaments of many kinds: rings, necklaces, ear rings, bangles, bracelets, anklets etc. Often, these items are passed from one generation to next, as part of dowries or inheritance.

However, it is a fallacy to limit jewellery to one gender because many males have chains in their necks, ritual bracelets on their wrists, rings in their fingers, or in their earlobes as a sign of spiritual blessing. The fashion of piercing different features and body parts is a recent trend as well as an ancient custom (for both sexes) among communities around the globe.

If one reads accounts of pre-modern rulers across continents, one realises that these powerful men had precious jewellery as an integral and important segment of their attire to affirm their opulence and power. Many a miniature painting of Mughal royalty documents them with their necklaces, rings, and turban brooches. Emperor Jahangir, in several miniature paintings, is dressed in far more jewellery than what can be associated with a female by contemporary standards.

Apart from its decorative aspect and beautifying potential, jewellery has other functions, including religious, magical – and as tools of subjugation. If amulets are used for scared purposes, some traditional jewellery from our culture like nose rings, bracelets and anklets are instruments to tame a living being. Slaves, war captives, abducted women, prisoners were shackled in contraptions not much dissimilar to jewellery for brides in our weddings.

Masooma Syed, in her recent show of jewellery, dismantled that conventional construct that we understand to be jewellery. Works from The Art of Eye Contact at O Art Space, Lahore (November19-23, 2020) challenged several notions linked with jewellery: as a piece of beauty, preciousness, gender specification, class demarcation, profound taste, workmanship, tradition – in fact, the concept of jewellery itself.

Her remarkable display of pieces insides the round-edged deep boxes, which reminded one of old TV sets, and theatre stage, presented her handmade jewellery as if characters of a mysterious play.

Syed’s fame is mainly on account of her paintings and sculptures. Works, which, like unique turn of phrases, have an unmatched individuality – due to the uncanny use of materials, blend of diverse sources/visuals, disruption of aesthetic principles. Her boldness in her artwork – a painting, a mixed media sculpture, a small-scale installation – was also evident in the recent exhibition, in which lines between wearable and viewable, valuable and available, useful and usable, personal and general were blurred. Jewellery pieces were sculptures and installation too. In the end, there were also extensions of the artist, Masooma Syed.

Many layers of the artist’s self were evident at the show. To start with, the entire installation was not about separate jewellery pieces, but an experience, a window to glimpse into another reality. The viewer entered the exhibition, through For You, a box containing two metallic eyes of raised eyelids stuck on a printed image of red curtain. The work, served as the opening passage with eyes wide open. The exhibition in its course revealed rings made of twirling particles, flowers, branches, trees, birds perched on branches or a pot, peaks and meadows, and mountains and valleys. There was a tower and a bridge (probably reminiscences of the artist’s period in the harbour city of Sydney, during her residency at the University of New South Wales, on a Commonwealth Foundation Fellowship Arts and Crafts Award in 1996-97).

It was pure delight to witness how ice cream scoops, fish wires, sewing needles, corrugated plastic and chains were transformed into a bridge. It was so believable that even though the chain communicated its necklace-ness, the tiny assemblage had a monumental quality. Likewise, in her cardboard and silver pendant Light House, you saw a large piece of architecture converted into an intimate object without compromising any of its two identities; because both the pendant and the lighthouse are mainly for ‘seeing’.

Masooma Syed graduated in Fine Art from the National College of Arts in 1993, and has continued working and exhibiting. She has also attended silversmith classes in Australia and learnt jewellery techniques from local artisans in Lahore. The experience, and her training in visual art contributed to treating her jewellery show as an exhibition of landscapes. Works with titles Lotuses with the Wind, Lotuses in a Pond, Humming Birds Perched on a Branch, Gulmohur Branch, Mountains and the Valley, Orchard, Sun Flowers, Peaks and the Meadows, Tulips, Water Lilies, and Trees with a Bird Nest suggested that the artist was sketching an aspect of nature using metal and other materials and techniques to transcribe her observation – and imagination.

Masooma Syed’s work is an apt example of the indistinguishable link between imagination and observation. Her highly stylised jewellery pieces stem from years of looking at found items, and the extraordinary depiction of familiar reality. Her work from the exhibition instigates the issue and division of art and craft. It also questions the boundaries between functional and optical; between fictional and real; and between fabricated and natural.

Syed takes viewers along to cross this bridge. Seeing them in display units, you understand that these are pendants, necklaces, rings and earrings, but at the same instance you are moved by these miniature sculptures. Of mountains, trees, birds, branches, smoke, drawn in metal – for beautifying someone’s body – but having independence/identity of a pictorial expression. Meticulously manufactured, these ‘sculptures’ confirm the delicacy of detail, exactness of what is portrayed and a way of finding lyricism in ‘metal’.

Her works are routinely called jewellery pieces, but these invoke a major issue in terms of defining art. What classifies an artwork: size, substance, method, utility? Or something else. The show also embodied another concern, the distance between art and craft.

Let’s not wake William Morris, but the question of art and craft in our midst rests on simple parameters. On value, and function. Craft items which are made for use, are normally sold at shops and often their low price is their most attractive feature. On the other hand, Masooma Syed’s work, still wearable – is created like collecting diverse ideas; for instance, combining old perfume bottles with silver branches, stems and leaves. This opens a new way to discovering our surroundings – in different formations. When we pick, and put these small things, we become aware of the intimate dimensions of the world and the immense possibilities of art.

Fazl asks all Opposition parliamentarians to resign by Dec 31