‘The government is a curse on people,’ says Maryam Nawaz 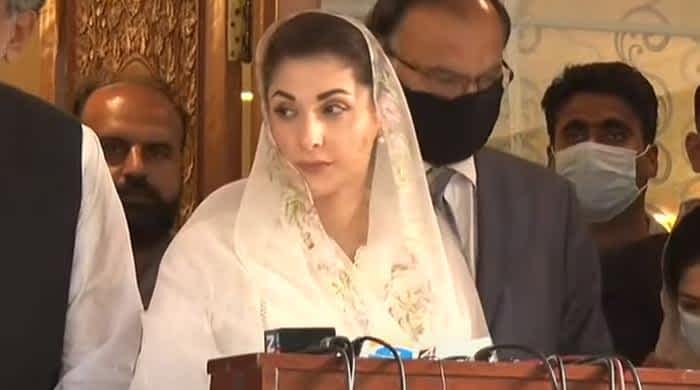 PML-N Vice President Maryam Nawaz said Tuesday the PTI-led government is a “curse” on people, as she criticised it for not handling the coronavirus situation in the right manner.

“We want this curse (incumbent government) to end …. we can bear them, but people cannot,” the PML-N vice president said while addressing a press conference alongside the Prime Minister of Azad Jammu & Kashmir (AJK) Raja Farooq Haider and other party leaders.

Speaking about O/A Level exams, Maryam said the government had put students’ lives at risk by conducting the examinations at a time when the coronavirus situation is worsening in the country.

“Other countries in the region have opted for other ways to conduct the examinations, then why did this incompetent government put students in  harm’s way,” she questioned.

This government has failed to curb coronavirus, implement SOPs, or safeguard people’s health, she said, adding there are no safety arrangements during Cambridge exams.

The PML-N vice-president asked the prime minister and the education minister whether they would send their own children to such examination centres.

Maryam also said that Prime Minister Imran Khan had given his government an NRO after his meeting a group of lawmakers backing estranged PTI leader Jahangir Tareen.

Meanwhile, taking over the presser, AJK PM Haider warned the PTI-led government against rigging in the upcoming Azad Jammu and Kashmir elections, saying that the party would fight against it and not sit quietly.

The AJK PM said rigging in the election would go in “favour of India”.

“[Rigging in the elections] would benefit India and it will be a move to deceive the people the Azad Kashmir,” the AJK prime minister said, adding the PML-N will not let anyone rig the elections.

“Everything will go in vain if elections are rigged,” he said.

General elections in AJK are due to take place in June or July this year. However, the exact date for the polls has not been announced yet.