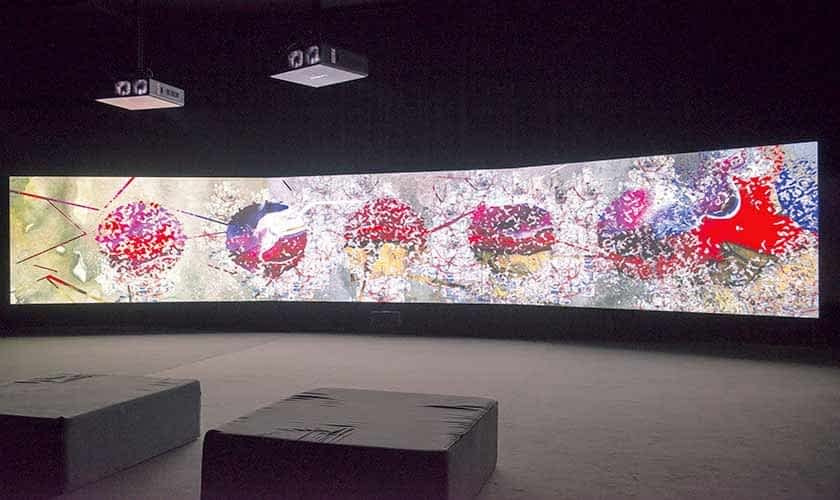 Many creative individuals are more attached to their grandparents than to their parents. Gabriel Garcia Marquez’s and Intezar Hussain’s maternal grandmothers, for instance, lent the tone of their tales to the authors for formulating their narrative techniques. In the case of some other writers and artists, a grandparent is never seen; yet his/her memory becomes a living source for producing works of private imagination.

Traditional miniature painting acts as the granny for artists, especially those from South Asia, who have been instructed into the European art. Even if you are trained in miniature painting, the pedagogical system is structured on Western art education in schools established by colonial rulers in India. So, it was only natural that several artists, who went to these institutions, preferred miniature painting to express themselves. It became a way of accepting, honouring and reviving a tradition that flourished before India was captured by the English, her last invaders.

Like Mughal miniature, a synthesis of Persian and local Indian painting, another amalgamation has emerged in the works of modern and contemporary artists from this region. The study of Indian miniature painting has polished a language, which is rooted in the past, but breathes in the present.

Pera Museum is presenting works of artists with their roots in miniature painting from Turkey, Middle East and South Asia. In the exhibition, Miniature 2.0: Miniature in Contemporary Art (curated by Azra Tu zu no lu with Gu lce Özkar), one is able to see different responses towards and interpretations of tradition.

To a simplistic mind and fundamentalist heart, tradition is a solid, unchanged and confined set of beliefs, practices, and products; but there is nothing more fluid than a tradition. If dissected, it unveils strands from multiple, diverse and disconnected sources, just like the DNA of a human being (reminds one of the title of Nadine Gordimer’s short story Beethoven Was One-sixteenth Black). In that sense, what is happening today is not new, it is a logical, normal and predictable course of art making, in which lessons learnt from history are dubbed to describe the present.

Probably, the real question is not the relation between the past and the present or the ‘use’ of traditional art forms, but the content of an art work, and if it critiques, comments or celebrates the past or the present. Actually, there are separate notions of time. In some societies both past and future exist as one entity (the same Urdu word, kal, describes these two divisions of time); on the other hand, Spanish writer “Miguel de Unamuno, in a sonnet, speaks of Time, whose source is in the future”. In the exhibition, more than formal solutions, one comes across artists’ response to issues of their time, mostly by employing a vocabulary – derived from their grand or great grandparents.

Shahzia Sikander’s work affirms how tradition can be treated, not as a precious object – but a point of possibilities, and to investigate the notions of race, gender, and history.

Halil Altindere, Canan, Shahpour Pouyan, Rashad Alkabarov, Imran Qureshi and Saira Waseem, appropriate the aesthetics of miniature painting (Mughal, Persian, Turkish), yet their works deal with the ‘new world order’. Altindere, in his scroll, has recreated the Ottoman Sultan Suleyman the Magnificent is Going to Friday Prayer (2020), incorporating the imagery of historic miniature added with biplane, helicopter, drone, smart phone and sports car. The political overtone is as evident as in Canan’s 1May, 2010, which delineates red flag procession at a main square of Istanbul, looking like a miniature painting, as if time has not passed/progressed.

His three-dimensional mixed media Adams and Eves (2020) constructs conventional flat imagery in round, yet the gruesomeness of visual cannot be missed (echoing the work of Jake and Dinos Chapman).

Saira Waseem, in her politically loaded miniatures, tackles the problems of violence, gender, and displacement through frequent appearance of guns (In Guns We Trust and Silent Plea), and a heart comprised of women in We, Sinful Women (a line from a poem by Kishwar Naheed). Imran Qureshi, after acquiring the technique of miniature painting, punctures it to comment on the current situation. In his series, Moderate Enlightenment, 2009, he renders bearded characters clad in hip attires, or in combination of vernacular and European clothes. This body of work, recalls the dominating phrase of a period, in which the West was offered an acceptable version of Muslims/Islam due to the War on Terror.

The concept – or contradiction — is further probed in Qureshi’s blood stained works, whether imprints of feet with streaks of red paint and scarlet vegetation, or an impressive installation of a blood-red paper (The Seeming Endless Path of Memory, 2019), that appears like a weave in the space. Shahzia Sikander’s Parallax 2013, embodies visuals from miniature imagery, Islamic geometry and other sources in her magnificent video installation (digital animation with sound), in which past pulsates into present, abandons paper and paint or ink, yet envelopes a spectator, as must have been the case with a connoisseur from Istanbul, Isfahan or Akbarabad centuries ago.

Sikander’s work affirms how tradition can be treated, not as a precious object – but a point of possibilities, and to investigate the notions of race, gender, and history.

History in the current exhibition has encountered many visitors. Iraqi-born artist Hayv Kahraman “photographs her body and uses these photographs as models to create the figures in her works”. Knowing her destiny as a foreigner, she “adds another layer to the relationship she establishes to her own past and creates unexpected confrontations with reference to Maqamat al Hariri” (written in the thirteenth century). By replacing the narratives of men, Kahraman depicts “stories about women”. Another artist, Dana Awartani’s has covered the floor of her family house in Jeddah with Islamic patterns in pigment and then wipes that out with a broom. This act, reminds one of Ai Waiwai’s daubing of traditional Chinese pottery into synthetic enamel paint and is a comment on the burden of tradition.

Artists from South Asia are liberated from this burden through several tactics. In Noor Ali Chagani’s Hanging Carpet, 2014, a traditional soft object is converted into (small) solid bricks, notifying the way tradition continues in different disguises.

Perhaps the best example of tradition entering the sensibility of contemporary aesthetics, as a comfortable and convertible guest, is the work of Hamra Abbas. Focusing on the representation of heavenly streams, in Waterfall Drawings, 2020 (marble and granite), Abbas demonstrates how tradition can be modern, and ancient: her images are located in the historic sites, but the artist’s view, vision and vigour render them in a contemporary language. The starkness of these visuals, the rhythmic nature of repeated lines, and the careful selection of colour, elevate Abbas’s work into a domain, which more than past or present, is about the future.