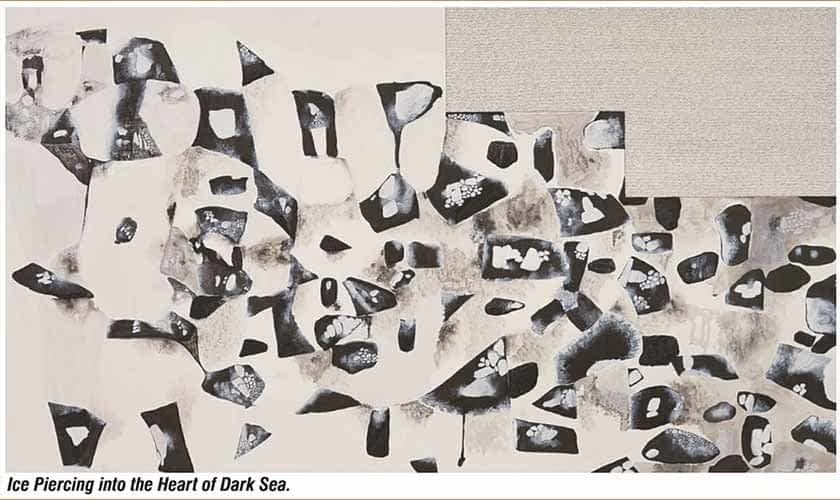 After my repeated questions about the nature and meaning of words that keep on appearing in Aisha Abid Hussain’s new work, the artist responded: “it is just jargon.” On closer inspection, one realises the meaninglessness of these interwoven letters, on the smallest imaginable scale, filling considerable sections of her artworks. These also look like the continuation of thin threads weaved across the surface – of paper and pashmina. In some instances, a viewer becomes confused about the origin of this text – English or Urdu? However, whatever the language, one erroneously gathers that marks made by Hussain represent words.

What words? Because, in the world of art, there are parallel languages. In Hussain’s case, intimate and intricate lines emerge out of a patient and painstaking process, without an obvious and regular content attached to these; except in one work (Tale of a Bodice) where ‘love lost’ and ‘hyper sexualised’ are identifiable. On a mere visual level, these tactile textures engage the eye and lead to a direction with tiny twists, turns and shifts. In a way these are tantalising, because due to the width of line, its colour, its movement, one knows that it is writing; one is frustrated at not being able to read it.

Then there is another layer of content; of concentration, meditation, dedication: actually of restriction. Practicing restrain by reducing the function of the hand to mere fingers, which move within a small hemisphere, although the swirly text line travels far. In a number of works, arduously, small marks are joined to produce lines, arranged either in circular format, or echoing the sweep of a fully loaded brush stroke (Bundle of Memories Forming a Black Rock).

These two aspects of her imagery reassert a desire to build. But unlike bricks to construct a huge structure, it appears that the act of ‘stacking’ marks is the prime concern – and achievement for the artist. In that respect Aisha Abid Hussain is not different from several other, successful artists living here, who earned their fame and fortune, by creating works with adjoining marks. Their imagery, technique and tactics inspired many, especially those still in search of their soul in art.

After graduating in fine art from National College of Arts in 2007, Aisha Abid Hussain acquired her MFA from Goldsmiths College in 2012. She established herself as an artist dealing with issues and sensibilities. In the past, her work addressed the institution of marriage – hence male dominance. Her earlier photography-based pieces captured the shift in gender-related (prescribed, accepted and imposed) roles. At the same instance, several of her works denoted sensitive lines, turning her art pieces into facsimilia of manuscript pages.

Her present exhibition, Manuscript of Silent Conversation, at Canvas Gallery (October 20-30), recalls the artist’s long-term association with painting the text. This is especially true for She Body-Manual, a work comprising 30 pieces, all in wasli. But unlike the usual wasli surfaces, these are thick blocks fabricated entirely with paper; resembling a wooden board. Hussain’s choice of paper is understandable, because these units – of equal size, and each a proportion that echoes the measurement of a book – look like book pages. The connotation of a book or manuscript is plausible due to what appears on individual parts. In some of these works, you notice unreadable scripts, either covering the entire area or in patches; residue of erased marks, and stains scattered on whitish backgrounds; outline of a female nude lying on her back; fruit thatconnotes some female body organ; and a woman’s blank face with her mouth in red lipstick.

Anyone familiar with her past exhibitions (her degree show and eight solo exhibitions), can guess that the artist is interested in two motifs: the script and body –though separate entities–are treated in the same spirit by the artist. Actually, Hussain conceals both. The female self is disguised in male suits (photography based prints from 2014, shown at her solo Two Not Together, Hanmi Gallery, London), or disappear through a thin and light mark. Likewise, the script is transformed into texture; and the artist explains “the exploration of text deriving from Pardakht (Persian term for Pointalism) into highly graphic images”.

Perhaps due to this type of script, she defines it as jargon, but jargon is not limited to language. It is encountered in creative expressions in different guises. The word in the late Middle English was used “originally in the sense ‘twittering’, ‘chattering’, later ‘gibberish’”. Today it connotes some sort of verbal construction that appears grandiose and unapproachable, and incomprehensible. Aisha Abid Hussain, consciously employs this trait of text, and turns it to some sort of a foreign language. Which is seen as a body of comprehensive codes, but cannot be accessed. Hence, it becomes just visual material.

Apart from two works (She Body-Manual and Tale of a Bodice), the rest of her art pieces shift the position of an artist, who in the past had represented female bodies, transcribed gender – and enjoyed the freedomto tackle her themes in the most unusual, uncanny and unacceptable tone. Contrary to this, Hussain now seems to have relocated into a comfortable compartment, with fellow passengers. She still writes her text, but in a number of works (Green Land of Purity, Once the Green Land of Purity, Colour Red from Love, Tale of a Burnt Page of Love Diary), tiny marks form a circular shape; sensitive lines are stretched inside basic square or rectangle. Thus a large space is filled with varying dots, dashes, etc.

Mercifully, Aisha Abid Hussain didn’t utter the word meditation, but some works, unfortunately lead to that quarter, overly-populated by young and established local artists, who have picked meditation as their narrative, a ‘choice’ that entails monochromatic, abstraction, and exhaustion of two elements, line, and point. For many, the act of putting these marks is satiating. Labour is liberating. Waqas Khan is the premier star of this diction, attracting artists here and there. But one must readjust this new movement ‘meditation through repetition’ (or ‘meditation as medication’) which started after Mohammad Ali Talpur. From his two person-show at Zahoorul Akhlaq Gallery, NCA (2006), in which Talpur replicated moving lines covering the entire surface. One was not sure about the artist’s intention, but seeing those works, a viewer gets the sensation of gazing at the sea weaves. No content, yet something that hits the chords of one’s soul.

Lately, there has been a surge of these closely placed marks in our art, taking cues from stitching on fabric, or uttering the name of God in one’s heart, but primarily filling paper or canvas with lines or dots of a single hue. You spot this style – method really, in galleries, studios and classrooms – and in collections. It is interesting that Talpur has moved beyond that intimate touch of tool on a surface, but several are still seeking this for their redemption.

Not Aisha Abid Hussain, one hopes; because her text has been about books, parchments, manuscripts, thus it is language, even though one could feel a fondness for ‘meditation’ (the other jargon) in some of her recent works. Probably, what still saves Hussain and her contemporaries is the line by TS Eliot: “Immature poets imitate, mature poets steal”.