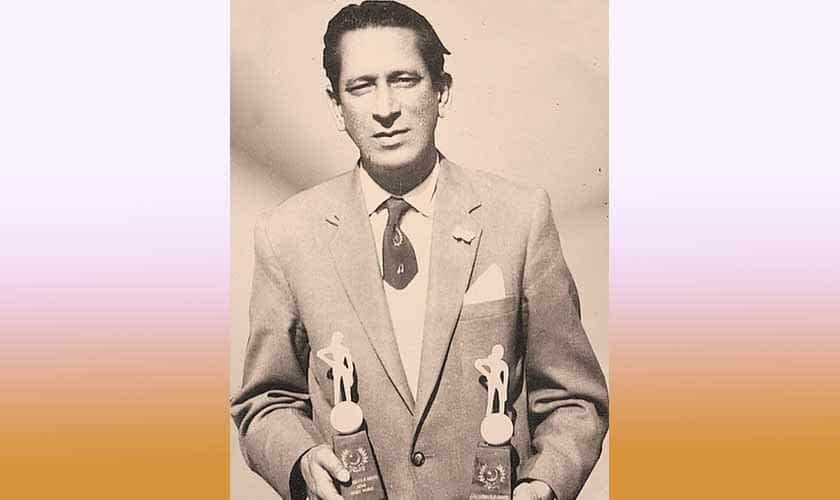 Khurshid Anwar was a popular composer. He started his career in films with Kurmai, an Abdur Rashid Kardar venture. In the beginning, the crossing of Indo-Pakistan border was not difficult and he did compose music for films being made in Bombay as well. He composed the music of Masood Pervez’s Intezaar, his first project.

Though himself a product of the traditional pedagogy in music, Khurshid Anwar was also aware of the changing society, the aesthetic patterns and the system of patronage. Realising the changes that had taken place and the need for involving the common listener to music drove Khurshid Anwar initially to join radio and then films. There, his struggle must have been to retain the excellence of music while refraining from bowing low to popular taste. Instead of bringing down the level of music, he must have wanted to raise the level of the listener, a goal that has rarely been achieved by even the most passionate human in pursuit of bridging the great divide of class and with it of cultural sophistication.

Khurshid Anwar did not belong to a family of musicians. Rather, most of the people in his family were in the legal profession. His father Khawaja Feroz Din, also a lawyer, was also interested in music. Most of the years that Khurshid Anwar was growing up, he was exposed to music through the sessions held in his own house of the leading gawaiyas of the times. It is said that he preferred a musical session to the receiving of his master’s degree at the convocation where he was also to be awarded a gold medal for topping the list of successful candidates. Feroz Din’s taste in music was not limited to film music or to popular folk forms but more deeply connected to kheyal and thumri. So, his baithak was known as one of those sites where good and high quality music was to be heard.

In those days, baithaks of the affluent hosted music sessions in the evenings extending well into the night. There, well-known vocalists and instrumentalists displayed their virtuosity to an audience that was also initiated. These baithaks were not only limited to the host or his family and friends. They were open to people who were interested in music. So the audience was neither very small, nor very large like in melas. However, this diversity provided a good opportunity to the vocalists and instrumentalists to display their talent before an initiated audience. The feedback was more informed and very educative for the performers themselves. Alas these baithaks and takias, spread all over the Walled City, died out with the people moving out and the shift in musical taste. The availability of recorded music which was both cheap and could be played at will was another factor.

Khurshid Anwar was committed enough to music to become a shagird of one of the most virtuoso of ustads, Tawakul Hussain Khan. No recordings of Tawakul Hussain were made because he was averse to recordings. He thought that his music was best heard when performed live and the limitations imposed by the then recording technology curbed his musical style. But people who heard him and those associated with him recall that he was a virtuoso and was a very difficult man to please. He was also unsparing where his shagirds were concerned. This must have been a good regimen for Khurshid Anwar. The value of excellence was thus drilled into him because he was an outsider and thus much that was taken for granted by inheriting musicians Khurshid Anwar must have really struggled to acquire.

This ustad-shagird transmission of musical knowledge, a very traditional manner of education involving personalised transfer of knowledge was not lost on Khurshid Anwar. When he was asked by Faiz Ahmed Faiz when the latter was an advisor to the first Peoples Party government to do something for music in the 1970s, he chalked out a proposal for the education of music on similar lines. He opted for the personalised transfer of musical knowledge as against the impersonal method that had been adopted by the institutions that were formed during the colonial period patterned on the model of colleges and universities. He had proposed that promising shagirds be given scholarships and handed over to the ustads to be taught according to their choice and will as it happened in the traditional set up. The judgment or the assessment was to take place on the basis of a performance by the shagird. This model had been successfully adopted by the ITC Sangeet Research Academy, Calcutta. However, unfortunately, it could not be followed up in Pakistan due to the political upheavals in the country Faiz lost his position and Khurshid Anwar’s project withered on the vine.

But in the process, he completed an invaluable project called Ahang-i-Khusravi for the Pakistan National Council of the Arts. It had two parts: one called Gharanoan Ki Gaiki where the famous ustads of the gharanas in Pakistan like Agra, Delhi, Gwalior, Kirana, Qawwal Bhachas, Sham Chaurasi and Patiala recorded in vilampat lai in certain designated ragas. The other was Raagmala, where the various bandishes in the ten thaats were recorded by the same ustads. It was preceded by a brief introduction of the thaat and the raga that was being sung with its musical characteristics by Khurshid Anwar himself.

He was also in the process of writing a book on music when he passed away. One wonders what happened to the manuscript.