The other side of nowhere | Art & Culture 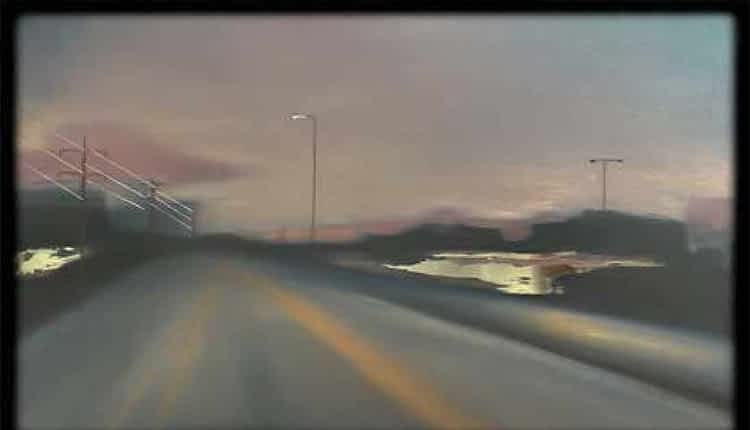 Some years back, I was sitting at a curator’s office in Lahore, admiring a landscape by Khalid Iqbal. One spot that particularly caught my gaze and praise was a small patch of water collected in the middle of dry green fields. I couldn’t believe that water could be painted so real, so wet, so dense, so vivid. Then I stepped closer and to my surprise discovered that the water was not painted, it was the only part of the landscape left blank (canvas), while rest of the view was built with pigments. It was rendered so masterfully that the empty space appeared to be water reflecting light.

To some extent, Kiran Waseem is also using the surface of her work as an image rather than covering it. In her paintings made on aluminium sheets, she draws glimpses of the city as if seen from a moving vehicle, or while walking slowly. Small pieces, mostly rectangles, look like windows of a car or a bus. The fleeting scenes of an urban environment are captured in a dim and diffused tonality. Clouds, the water residue, and wiped, smudged or scraped portions suggest the presence of light; like the lines of electricity wires and poles, scratched, remind viewers of these installations turning white and bright against the dark clouds during the monsoon days – days that appear to be a segment of night.

Waseem’s vision is an agreement between the day and the night, because we cannot define a specific hour – or season looking at these scenarios: the dusk, dawn, afternoon, overcast skies or something else. Actually, the paintings do not document a particular location in a certain time. These, as the artist explains, are not about “actual travel, but the metaphor of travel”. They are more like the recollection of a journey, because what is left, is not the exactitude of a city, i.e, colour of buildings, details of signboards, number of cars or pedestrians, measurement of distance covered, but a hazy landscape that our memory – probably the most prolific and accomplished abstract painter – preserves in its gallery of private pictures.

Due to the indefinite aspect, we perceive her views being personal, aged, decaying and from another phase of life. Especially since some of the paintings resemble an old sepia photograph, for example, You Were Here Once. Interestingly, the work is not just about rendering an imaginary landscape, it suggests alienation in our cities. The fact that you don’t find any human, not even other living beings (bird, animal, insect) in these surroundings dominated by electricity poles and roadside lights, signifies the change of pattern and preferences in our urbanised society. Somehow, Kiran Waseem’s works look as if produced by a 21st Century, de-situated Edward Hopper. The haunting atmosphere, associated with the American painter, is accomplished by Waseem in her oil-on-aluminium pieces.

The choice of material is important in Kiran’s case, because aluminium sheet is bright and oil colour matt and dull, thus the painter’s intelligence creates a spark in these views of receding city lines in diminishing light. The painter’s remarkable craft is also evident in the work of Mubashar Iqbal, the other participant of the two-person exhibition, Distance, at ‘O’ Art Space, Lahore. Both Kiran Waseem and Mubashar Iqbal are recent graduates from the National College of Arts (2017 and 2018). Yet, their works show a maturity in vision and technique.

Mubashar Iqbal’s acrylic-on-canvas pieces affirm his deftness in the handling of paint, but even more of his sophistication in building a visual vocabulary. Seeing his canvases is like watching the artist’s process: deciding on shapes, gaps, thickness and variation in hues while constructing a painting. His canvases are like pieces of music, which more than revealing a visible world, communicate something separate, perceptible, invisible. Following the famous paradigm of Port Royal Grammar (a pioneering work on the philosophy of language published in 1660) “Invisible God created the visible world”; we recognise strong sensations reverberating in our mind while observing these objects, which in their nature are a contract between the real and the imaginary.

With the precision of a surgeon, Mubashar Iqbal uses his tools to dissect reality into a new entity. On a closer scan, the painted canvases look like low relief sculptures, because the difference of form is not just the change of shade, but varying layers of pigment. One can imagine the hard and tiresome task of masking each area in every stage of execution. What comes out of this labour of love is a sheer pictorial delight, as well as the artist’s approach towards reality.

At a quick glance, one presumes that the subject may not matter to Iqbal; his method of making a picture is so meticulous, complex, refined, sensitive – and sensuous, that images in diverse formats just serve to highlight the excellence of his artistic skill. However, a prolonged attachment to his paintings suggests Iqbal’s concern in concocting an imaginary territory. A typewriter placed on expanses of delicately differentiated colours with a cactus and another plant suggest something unusual and unworldly – a desert nowhere. The sheet on typewriter reads, “To Go Nowhere,” and the title of the painting, To Make You Feel, pushes us to the realm of unknown – a kingdom that can only be visited with the passport of our sensory experiences.

Mubashar Iqbal has portrayed an open suitcase with a photo-frame; a chest with its lid ajar and containing some discarded letters: an ornate picture moulding around the cover of a book showing flower and petals; a cloud against a half-shut window; a jacket, with a rose-like brooch and gloves in the pocket, hanging on the wall; a post box spotted from a window and curtains. All these depict familiar settings, but while contemplating them, one is moved to another plain. Far from the gallery floor, traces of a world out of the glass panes, the rustle of life beyond the exhibition – his works lead to a sphere of selectiveness. One starts believing in the world composed of complementary shades – of pink (There Could Be) or browns (As a Whole, and To Make You Feel), because no one is interested in recognising a case, a typewriter, a picture frame, but the variations in colours that describe a new reality that becomes intimate: a whisper.

Mubashar Iqbal dealt with a similar pictorial language in his degree show at the NCA, but his recent works and Kiran Waseem’s paintings recall the joy in shaping/deciphering the shared language we call art. Their exhibition, Distance, was held for only five days (May 17-21, 2021), but their works confirm that they will live long in the art of this country.

Nora Fatehi requests for donations; ‘Now is the time for all of us to come together and help each other’