This Sudan, the last white male rhino left in the world 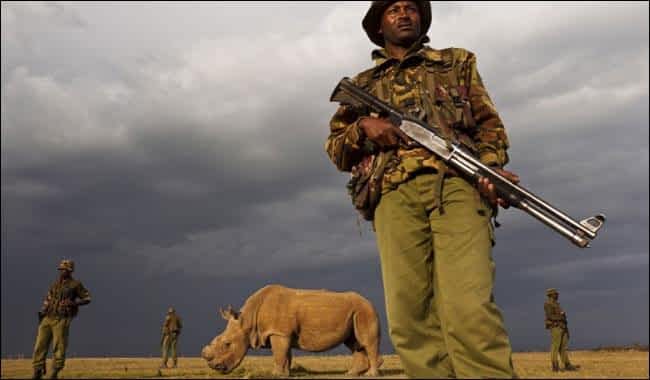 The only known male northern white rhino left in the world is under guard 24 hours at Kenya’s Ol Pejeta Conservancy.

Namely Sudan, is 42 years old adult animal and is under 24-hour protection by armed guards. Rhinos are targeted by poachers, fueled by the belief in Asia that their horns cure various ailments.

In addition to round-the-clock security, the conservancy has put radio transmitters on the animals and dispatches incognito rangers into neighboring communities to gather intelligence on poaching.

The northern white rhino cannot mate with a black rhino, so there is danger of extinction of the species.

In June this year, CNN had reported that Sudan and the two female rhinos — Fatu and Najin — are the last three northern white rhinos left in the world.

Though the three northern white rhinos are physiologically healthy, age might be a factor, says George Paul, the deputy veterinarian at the conservancy.

“Sudan is currently old and may not be able to naturally mount and mate with a female,” he says.

Najin could conceive, but her hind legs are so weak, she may be unable to support a mounted male.

“There has been recorded mating between different pairs over the last few years, but not conceptions,” Paul says.

And if one is not recorded soon, the beloved animal will go extinct.