Three arrested in connection with murder of Usman Institute’s director 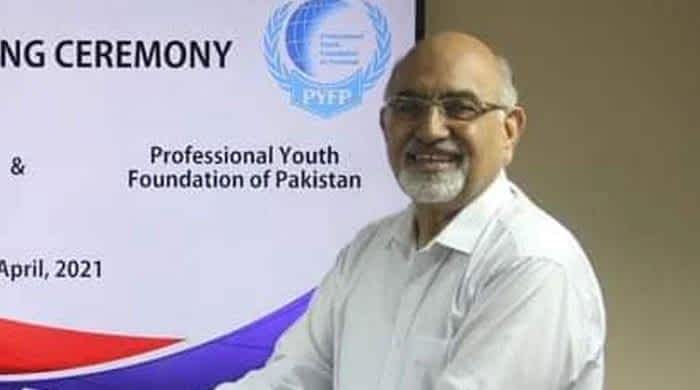 Karachi police on Saturday claimed to have arrested three men for their alleged involvement in the murder of an engineering institute’s director in broad daylight in District East a day earlier.

Dr Zahir Ali Syed, director of the Usman Institute of Technology (UIT), a nonprofit institute affiliated with the NED University of Engineering & Technology, was the ninth person to die in a street crime since the new Karachi police chief took charge last month, according to media reports.

One of the arrested suspects is said to be the shooter and another the supplier of the weapon. Meanwhile, families of some 50 other people killed during armed robberies and mugging attempts in the city continue to await justice.

However, the police claimed before the media that they have arrested Rustam Khan, Ibrahim and Zakir with the help of CCTV camera footage. “Rustam shot the victim, while Ibrahim accompanied him [the shooter],” said the police.

“The third suspect, namely Zakir, is a facilitator who not only rents out weapons but also gets 50 per cent of the looted cash and other valuables.”

Police also claimed that after Dr Zahir’s murder, the suspects committed three more robberies, and that the investigators have obtained CCTV camera footage of these crimes as well. Officials said they have also seized weapons and a motorbike from the suspects.

While the police have claimed that Dr Zahir’s driver has identified the suspects and the detainees have admitted their crimes, the officials did not share the details of the forensic analyses of the weapons found on the suspects and the empty shell of a 30-bore pistol picked up from the crime scene.

Earlier, FIR No. 296/21 was registered at the New Town police station under sections of murder and robbery on the driver’s complaint against unidentified persons. The complainant said that one of the two suspects had shot Dr Zahir when he sped up the car despite the culprits ordering him to stop.

“Director sahib himself drove the car while returning home, and the incident had occurred shortly after he dropped me off at National Stadium Road,” the driver told the police. Dr Zahir was taken to the Aga Khan University Hospital (AKUH), where he succumbed to his injuries.

Police said the academic was killed over resisting a mugging attempt. The incident took place near the Khatoon-e-Pakistan College. “The assailants shot the victim after he sped up the car instead of stopping,” said SSP Saduzai.

The officer ruled out the possibility of a target killing or car snatching. “Usually, two suspects are not involved in a car snatching attempt, and so far our investigation suggests that the suspects were street muggers.”

The 70-year-old director of the UIT, which is situated in Gulshan-e-Iqbal, was shot once in the shoulder. “The bullet got stuck in his body and he died due to severe bleeding,” the SSP quoted the doctors as saying.

The driver said the victim had dropped him near the AKUH before heading towards his residence in Bahadurabad, but he had driven just a little further when two men on a motorbike tried to stop him.

“Their faces were visible because they were not wearing masks or helmets,” the driver recalled. He said that as Dr Zahir tried to escape, one of the suspects fired a single shot at him.

After the murder, police said the academic had not received any threat from anyone and they were trying to have sketches of the suspects drawn with the driver’s help. Police were also unable to get any CCTV camera footage of the crime scene.

“No CCTV camera was installed at the crime scene, but we’re trying to obtain the footage of the surroundings to help the investigation, and trace and arrest the suspects,” Saduzai had explained.

“We have also recovered an empty shell of a 30-bore pistol from the crime scene,” he said, adding that the casing would be sent to the forensic division of the Sindh police for ballistics cross-matching.

Dr Zahir was an engineer who graduated from the Dawood Engineering College. He later completed his master’s degree from the Massachusetts Institute of Technology, following which he moved to California for his doctorate.

He returned to Pakistan and joined the NED University as a lecturer and academic counsellor. Utilising his IT industry experience, he helped develop several software houses and IT companies. He later launched Avanza Solutions, a global software solutions provider.

After having served for long in the IT industry, he again shifted to academia and joined the University of Huddersfield-associated Karachi Institute of Technology. He also owned the Cambridge Advisors Network, providing technology and IT-related consultancy to multiple universities. He had joined the UIT as its director in 2016.

Welfare of poor to be given top priority in Punjab budget: CM

How Kanye West and Irina Shayk are making their relationship work