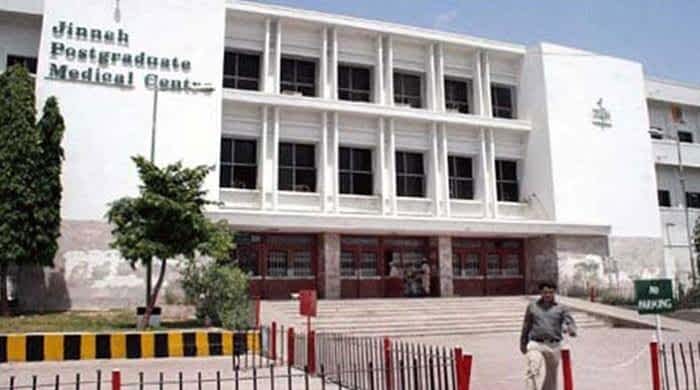 Mushtaq Chhapra, one of the four members of the board of governors (BoG) formed by the federal government to oversee the affairs of the Jinnah Postgraduate Medical Centre (JPMC), has hinted at quitting the BoG if the tug of war between the federal and provincial governments over the control of the JPMC and two other hospitals of Karachi continues.

He has also stated that two other members of the board may also quit if the conflict is not resolved. Talking to The News on Friday, Chhapra, a philanthropist, said he and two other members of the board believed that three health facilities of Karachi — the JPMC, the National Institute of Cardiovascular Diseases (NICVD) and the National Institute of Child Health (NICH) — should remain in the provincial control. “We are not political people and we only joined the board of governors constituted by the national health services ministry for improving health facilities at the JPMC. If the tug of war over the control of JPMC between the federal and provincial governments continues, three of us, including I [Chhapra], Ms Ronaq Lakhani and Irfan Daudi, can quit the board of governors,” he said.

Not a single meeting of the four-member BoG has been held yet despite being scheduled on three occasions since March when the board was constituted.

The BoG was formed under the Medical Teaching Institutes Ordinance by the federal ministry of national health services. Its members include Chhapra, philanthropist Ronaq Lakhani, consultant surgeon Dr Muhammad Irfan Daudi and Rashid Khan, a businessman. Due to the Sindh government’s opposition to the federal government’s decision of forming the BoG, three scheduled meetings of the board for the selection of its chairman have been cancelled.

In response to the constitution of the BoG, Sindh Health Minister Dr Azra Pechuho wrote a letter to Special Assistant to Prime Minister (SAPM) on Health Dr Faisal Sultan, offering that the provincial government could continue to manage and operate the JPMC, NICVD and NICH through an agreement with the federal government.

Chhapra, who heads the Patient Aid Foundation (PAF) at the JPMC, maintained that they were not expecting such a strong reaction from the employees and the Sindh government to the federal government’s move to run the JPMC through a BoG. He added that he had realised that the JPMC, NICVD and NICH should remain in the provincial control as they were functioning effectively.

Commenting on a recent statement of Sindh Chief Minister Syed Murad Ali in which he claimed that Prime Minister Imran Khan expressed his desire to resolve the issue of the three hospitals as per the Sindh government’s wishes when the former took up the matter during the recent meeting of the Council of Common Interests (CCI), Chhapra said he believed that sanity would prevail and a decision would be made in the best interest of hundreds of thousands of patients of the three facilities.

“I personally believe that on the directives from the PM Imran, federal law minister and special assistant to prime minister can come up with some solution to this problem where these health facilities could continue to function smoothly in the provincial control,” Chhapra said.

When asked why he decided to become a member of the BoG formed by the federal government, he said he and his colleagues in the board only wanted to improve health facilities at the JPMC where thousands of people came from not only entire Pakistan but also other countries to seek quality treatment.