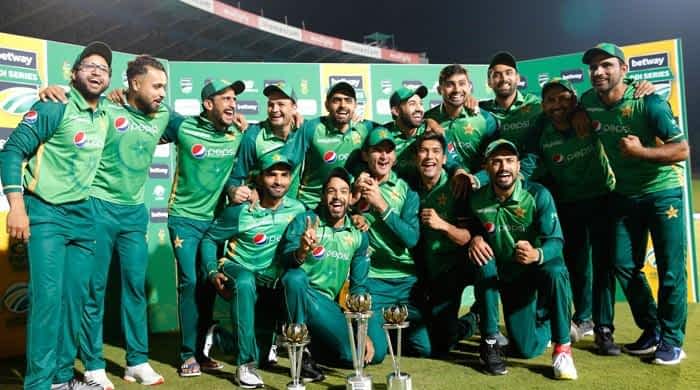 The Pakistan team pose for a photograph after winning the series after the third one-day international (ODI) cricket match between South Africa and Pakistan at SuperSport Park in Centurion on April 7, 2021. — AFP/File

Their victory was built on Fakhar Zaman’s brilliant century, his second in as many matches, captain Babar Azam’s 94, Hasan Ali’s sparkling 32 not out, and Mohammad Nawaz’s and Shaheen Shah Afridi’s three-fers.

Fakhar stretched his excellent run of form from Johannesburg to Centurion as the left-handed batsman smashed 104-ball 101, embellished with nine fours and three sixes that set the platform for Pakistan to post 320 for seven. Babar was named player of the match award, while Fakhar was awarded player of the series.

He provided the tourists with a perfect start to the innings with Imam-ul-Haq, who scored a breezy 57 off 73. Later, he established a 94-run stand for the second wicket with Babar, whose exquisite strokeplay saw him strike seven fours and three sixes off 82 balls.

Janneman Malan and Aiden Markram provided South Africa with a quick start with a 54-run partnership in nine overs. Shaheen Shah Afridi dismissed Markram with a length delivery which took the inside edge on its way to Sarfaraz Ahmed’s gloves.

Debutant Usman Qadir dismissed Smuts before Mohammad Nawaz’s left-arm orthodox accounted for Malan, Bavuma, and Heinrich Klaasen as the hosts found themselves tottering at 140 for five.

The fifties from Kyle Verreynne and Phehlukwayo brought South Africa back into the contest as they put a 108-run stand for the sixth wicket before Haris Rauf sent the former back to the pavilion in the 44th over. Phehlukwayo became Hasan’s first wicket in the next over and Haris struck again in his next.

South Africa lost their final wicket on the third ball of the final over on a scorching Shaheen’s yorker.

US defence secretary arrives in Israel amid Iran nuclear talks