Tokyo Olympics: Pakistan’s Arshad Nadeem misses out on medal but wins nation over 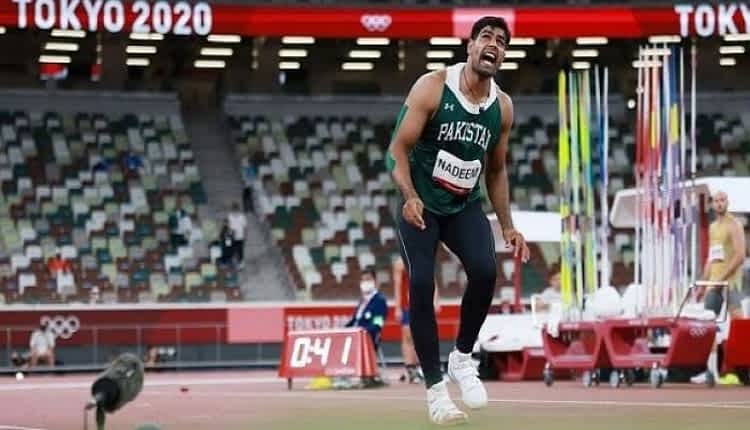 Pakistan’s star athlete Arshad Nadeem, who was competing in the Tokyo Olympics’ javelin throw final on Saturday, missed out on a medal but won the nation over with the spirit and determination he displayed throughout the contest.

Although there were a total of 12 contestants participating, all eyes were on how the Pakistani athlete performs compared to his opponent from India, Neeraj Chopra.

The action began at 4pm according to Pakistan Standard Time.

At the end of the first throw, India ranked 1st, whereas Pakistan was in 6th place.

In the second throw, Chopra scored a distance of 87.58m, whereas Nadeem’s attempt resulted in a foul, because he crossed the line.

The third throw resulted in Chopra scoring 76.70m and Nadeem, who was in the ninth spot, moving up to fourth place after scoring 84.62m.

Therefore, at the end of three rounds, Nadeem finished fourth and qualified for the final round.

In the last round, Nadeem’s first throw resulted in a distance of 82.91m, whereas Chopra overstepped and got a foul.

In the second throw, Nadeem threw the javelin to a distance of 81.98, whereas Chopra overstepped yet again and got a foul.

In the third and final attempt, Nadeem was unable to have a valid throw counted as he overstepped the line. Chopra, meanwhile, threw the javelin at a distance of 84.24m.

India’s Chopra came in first with a score of 87.58m to win a gold, in a first for the country in the athletics category.

According to the rules of the contest, in round one of the final competition, each contestant is allowed three attempts to throw.

This follows with the eight athletes on the top advancing into round two with three more attempts, while the rest are eliminated.

The best of the six throws are taken into account.

Pakistan has not won an Olympic medal since 1992.

The last Olympic medal for the country was a bronze, claimed by the Hockey team at Barcelona. Before that, Boxer Hussain Shah had brought an individual medal home in 1988.