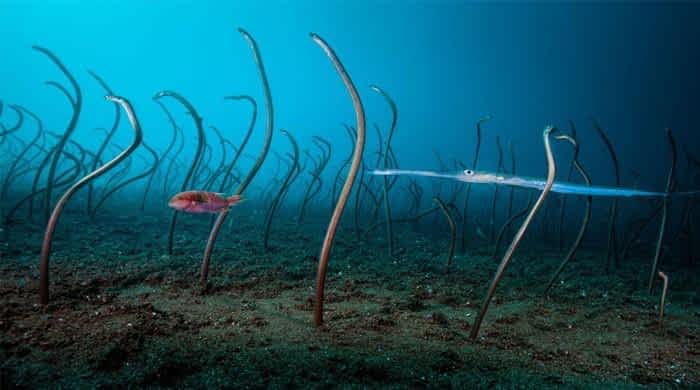 The contest culminated about 48,000 entries from over 100 countries, 19 category winners were named in this competition. About 100 of the pictures will be displayed at the London’s Natural History Museum before they begin their tour of the UK, as well as other locations, some of which include the US and Australia.

First place went to the picture with the most spunk and the most riveting of ends. It was awarded to Chinese photographer Yongqing Bao, who hails from the province for Qinghai. His piece is named as ‘The Moment’ and showcases the final moments of a marmot who seemingly froze stiff after seeing his life flash before his eyes in the form of a Tibetan fox who seemed ready to lunge on top of him and have the most satisfying of dinners.

The ‘Young Wildlife Photographer of the Year 2019’ award went to the 14-year-old Cruz Erdmann who was diving off the coast of Indonesia, when she came face to face with a big-fin reef squid that seemed to glow under the water with the most beautiful iridescent of hues. The picture was taken at night in the Lembeh Strait off North Sulawesi.

The young man was a fast swimmer and a passionate photographer, he had been asked to hold back during his expedition under the water, there he met a bigfin reef squid locked in courtship, one of them jetted away as Cruz approached while he was able to capture the other just in the nick of time. He seemed to be one of the lucky few who got to witness a glowing show of underwater romance between some of the most mesmerizing creatures in the deep blue sea.

This strikingly contrasting picture of a herd of male chiru, trailing off on a snow-veiled slope showcases the opposing elemental properties of two distinct colors, harmonizing with each other in the most picturesque way possible. The chiru seemed to be heading for a warm island of sand right by the undulating slopes. They left striking footsteps in their wake. Looking down from the vantage point of the photographer who was positioned a kilometer away, which amounts to about half a mile, was able to capture this moment in history before it dispersed and vanished into the warmth of the sun and sand, away from prying eyes.

Looking at this intricately laced piece of art, laced with hints of grey and orange showcase a weaved cypress tree, which appears otherworldly over Pinnacle Point, in Point Lobos State Natural Reserve, California, US. After an extensive experimenting session, photographer Zorica Kovacevic chose a close-up, abstract of a particular tree in the area. On the day of the capture there seems to have been a lucky overcast which shielded Zorica from the harsh lights at a rare yet captivatingly-quiet moment. That amount of time provided her with just enough time to take about 22 stake images which she overlaid to construct this colorful, maze.

Another massively breathtaking picture depicts a male jaguar which is projected to be captured on the US-Mexico border fence. Alejandro Prieto, the photographer behind this symbolic piece, considers this to be a symbolic representation of the jaguar’s past and future in the US. Today, jaguars are mostly concentrated around the Amazon but historically they freely roomed Southwestern US. Due to hunting, which became banned back in 1997, the jaguars became a prosecuted species and became virtually extinct in the US. This picture symbolically highlights their construed position.