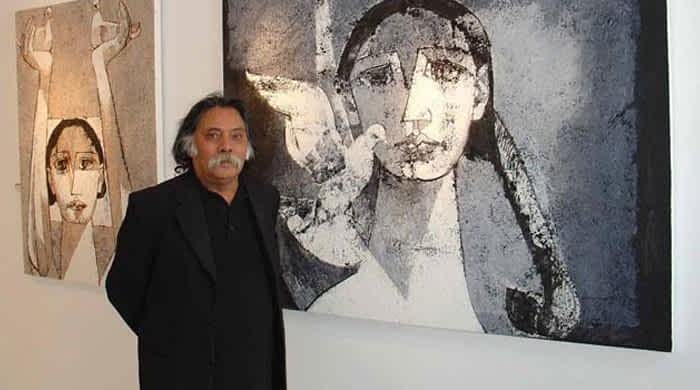 The challenge to grasp and comprehend the nature evoked a search and exploration that led renowned Pakistani artist Jamil Naqsh to this world of art. To him, form was a complete entity full of meaning.

Born in 1939 in Kairana, Naqsh was brought up in the atmosphere of old-world refinement and culture cultivated by the economically independent landlords of U.P. (India).

Old values were ingrained in him though he left his life of comfort to seek his fortune in Pakistan.

He joined the Mayo School of Art in Lahore in 1953; here he chose miniature painting as his subject of study. Naqsh became the student of Haji Sharif – a dedicated teacher who passed on his inheritance of generations of this art to his promising pupil. In two years (1953-54) Naqsh felt he had gained initiation into the technique of the miniature and decided that it was now for him to use it in his own way. From there his journey continued without any pause till today (16 May, 2019) when he left this world to meet his divine Creator.

Naqsh’s perception was, “Not talking about an issue does not deny its existence”.

He portrays perfection and beauty of what he considers to be the most beautiful of all creations – woman and pigeons.

A perfectionist himself, he respects those who excel in their field. In one of his series, Naqsh devoted his work to one of the greatest artists of the twentieth century, an Italian born sculptor Marino Marini. In another series he paid homage to Pablo Picasso.

The predominant theme of his work was pigeons and women but some of the drawings depicted horses and bulls, also a favourite theme of Marini who was a man of symbols.

“My work does not directly relate to Picasso, it is connected to his spirit: the independence to break forms and create a new order,” said Jamil Naqsh.

The collection of his artworks demonstrated a surge of creativity that has led him to a lot of experimentation, as experimentation is a constant probe with countless probable possibilities, which took Naqsh to an endless world.

Naqsh seemed to move steadily towards his themes especially nudes and pigeons, but he has proved that there was an infinite variety in these basic themes. But, whatever his theme was, the perfection and mastery of the techniques, such as space, volume, form, texture and lines were outstanding. These faultless techniques made his creations unique and incomparable.

As Picasso said, “knowing the line”, it was this balance between space and line, between texture, and form and surface that he pursued with concentration and patience. The cunning in his figure drawing and colour application found in his work is unbeatable.

Naqsh freed himself from the ties of the world to find more time to devote to his passion. He remained in his studios in peace and harmony with his painting and created master pieces in solitude.

The famous series, famed in art circles, in which the artist adopted the pigeon as his motif, it was this series, in which Jamil Naqsh expressed harmonic emotions through the winged creatures.

Jamil Naqsh began to paint pigeons in the early 1960s. There were many implications in his choice of subject. Maneuvering shapes and forms with the signature pigeons Naqsh created deep impression. The collection of ‘pigeon’ artworks created an awesome visual experience, the expression of a complex artist who surpasses feeble explanation.

The calligraphic work was actually a personal representation of the Arabic script by the artist. Imbued with harmony and tranquillity, Naqsh has painted the 99 Names of God, along with 50 verses in praise of God.

Fluid and spontaneous yet disciplined, Naqsh’s beautiful calligraphy is praised by all. Irregularity in the characters’ size, style and colours adds meaning to the calligraphy having different stroke order with each character.

Although in different works, he used different techniques and styles with every painting having a strong aesthetic appeal. With many themes and variations of his calligraphy paintings, the content may be partially illegible, but is more meaningful to a viewer having love and respect for the work on view.

His book ‘The Painted Word’ focuses on calligraphy, with reference to ancient and contemporary scripts, with a detailed explanation of the concept of the 99 Names of God including 416 colour illustrations by Jamil Naqsh.

For a number of years his paintings and drawings graced the international auction houses such as Bonhams, Sothebys and Christies. He received numerous honours and awards in appreciation of his work.

Meghan Markle aligning to run for US president as Democratic candidate: report