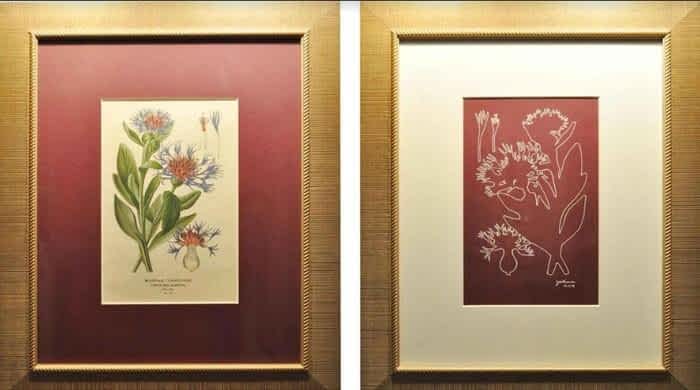 The first impression visitors have, when they enter the Canvas Gallery, Karachi is of beauty and tranquility just as if they are in a garden. Colourful flowers scattered everywhere on the walls in Fatima Munir Amjad’s paintings welcome Karachiites to her solo show titled ‘Unnatural Selection’.

It is indeed a unique idea to try to find something unnatural in nature. Flowers are one of the most beautiful creations of nature and Fatima used them symbolically to portray our society where the selected area of the paintings depict our traditional behaviour of selecting certain things or roles regarding women.

Almost all of her work is diptych portraying two sides of a coin. In her case she wants to bring forth the hypocrisy of our society about everything associated with women. Whenever we talk about an issue there has always been two solutions – one about men and other about women creating an imbalance in our society. We have seen men and women as two different creatures not as human beings. Women are supposed to act and react according to certain guidelines taught to them from home to school and in their career life. Many women follow the rules just to avoid unnecessary criticism and live a normal life according to society but some rebel and live against the odds.

The selected areas in her paintings represent attributed roles given to women by the society, which are like burden she is expected to carry her whole life maintaining balance between her real self and the expected self. All the diptychs have a colourful picture of flowers and the other half portrayed the shadow and outline of the first image depicting the hollowness of life – a life outlined by someone else for you to live. And that is really an ‘Unnatural Selection’ for women in our society.

“The world may be taking small but steady steps forward in the fight for women’s rights yet even in privileged circles, such as the one I belong to, a strong, independent woman with thoughts, ideas and a voice is not a man’s equal,” Fatima said in a statement.

Fatima used traditional object – flowers related to feminism and evolved it to incorporate images according to the theme of the paintings. In her latest series of works, she re-appropriates the metaphor of flora, to encapsulate the notion of the ‘wallflower’, the symbol she ascribes to as the female subjugated by patriarchy.

She has expressed her experience of these unnatural imbalances, the simplistic reduction of a woman to the functions that serve an imbalanced society, through basic geometric forms, which mimic the limited roles ascribed to the fairer sex. Through repetition and subtle, clever manipulation of form, she transmits a message both deeply personal as well as universal.