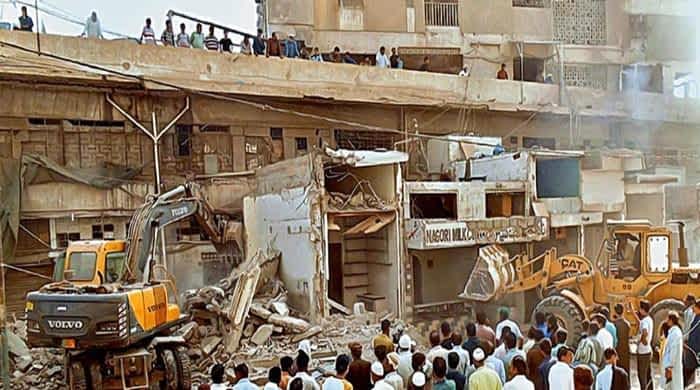 local government secretary, Karachi administrator and commissioner, and Karachi Metropolitan Corporation’s directors for Katchi Abadis and anti-encroachment departments to maintain the status quo, and ordered them to file their reports till April 15.

Some 50 residents of Federal B Area, Tayyababad, Rehmanabad, Kausar Niazi Colony, Choona Depot, Liaquatabad, Wahid Colony, Qabail Colony, Peoples Colony and Arafat Town had filed two separate suits against the provincial and city administrations. They claimed to have possessed a 99-year lease of their plots by the KMC and the Sindh Katchi Abadis Department between 1994 and 2004.

Their attorney Altaf Khawaja said that the plaintiffs had constructed their houses legally, but recently the authorities had marked their houses for demolitions without issuing any prior notices to them.

During the hearing, advocate Rashid Khan appeared on behalf of the KMC administrator and directors for Katchi Abadis and anti-encroachment departments. He, however, did not raise objections against the suits seeking a stay order against the likely demolition of the houses.

The deputy commissioner Central through his representative Naseem Ahmed, the Mukhtiarkar of the district, sought more time to submit his comments and counter affidavit, which was allowed by the tribunal. The commissioner and local government secretary remained absent.

The presiding officer noted that “in view of the apprehension of the demolition and anxiety of the plaintiffs that the defendants have marked their leased properties, which are allegedly not an “encroachment” under the law and that they have filed a suit under the Sections 13 and 14 of the Sindh Public Property (Removal of Encroachment) Act, 2010 for determination whether the subject property is a “public property” or “encroached” an interim stay order is granted, till the next date.”

He ordered the defendants to maintain the status quo and not to threaten or take any coercive action against the plaintiffs till the next hearing. He added that the tribunal was fortified to give such a direction and grant interim stay as in similar matters and on similar facts, the Sindh High Court (SHC) had granted interim stay orders vide February 11, February 26 and March 18 in the suit.

The civil society demanded immediate implementation of the Supreme Court’s May 9, 2019 order of Justice Gulzar Ahmed in which he directed the authorities to rehabilitate the affected persons within one year with all the facilities.

They recalled that Pakistan Peoples Party Chairman Bilawal Bhutto had announced while addressing people of the rain-affected areas on September 6, 2020, that no one would be displaced from the Gujjar Nullah without being provided with alternative residence.

Urban Resource Center’s Zahid Farooq during the presser said that according to rough estimates, some 14,000 houses and 3,000 shops would be demolished surrounding these three rain drains.

He said measures had to be taken for the affected people’s alternative residences so that no humanitarian crisis could occur. “This is state’s responsibility and also mentioned in the country’s law.”

It was said that the government was saying that land surrounding the Gujjar Nullah, Manzoor Colony Nullah and Orangi Nullah would be retrieved before Ramazan.

Even during wars, according to the United Nation’s rules, if any festival turned up, the wars had to be halted so that residents of any country could celebrate their religious festivals, it was said. Along the Gujjar Nullah, there were Christian colonies in Godra Camp, Kosar Niazi Colony, Sadiq Nagar, FC area and Hassan Colony and their residents had to celebrate Good Friday and Easter on April 2 and April 4 respectively but now they were worried about demolitions, the press conference was told. Urban planner Arif Hassan, and rights activists Karamat Ali and Asad Iqbal Butt also addressed the press conference.