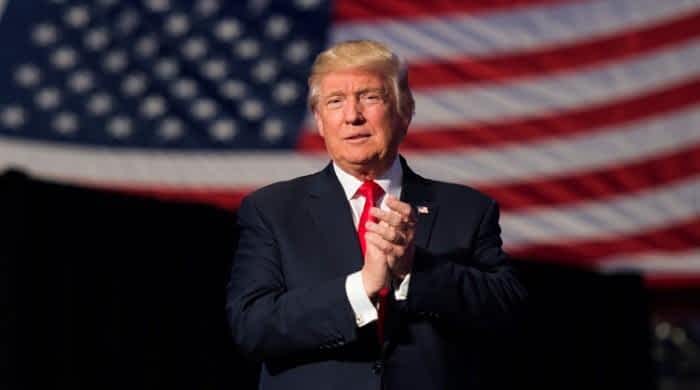 President-elect Donald Trump arrives to speak at a USA Thank You Tour 2016 at the Giant Center on December 15, 2016 in Hershey, Pennsylvania. Photo: AFP

US President Donald Trump’s official campaign website on Wednesday was taken over by cryptocurrency hackers only a few days before the crucial  polls.

The incident was brought into notice after the unknown adversaries were shown over various parts of the page.

According to a news report published in The New York Times, the defacement lasted less than 30 minutes but the incident comes just as US law enforcement authorities and intelligence agencies have been on high alert for foreign interference ahead of polling day on November 3.

Confirming the incident, a spokesperson for the Trump campaign, Tim Murtaugh said that the team is working with the enforcement authorities to investigate the source of the attack.

“There was no exposure to sensitive data because none of it is actually stored on the site. The website has been restored, “he added.

Although the scam appeared to be part of a common cryptocurrency scam to get people to irreversibly donate money online, Cybersecurity experts noted that the incident could have been caused by tricking a website administrator into turning over their credentials, in what is known as a phishing attack, or by redirecting the campaign website to the hacker’s own server.

“Intelligence agencies have been closely monitoring hacking groups, including teams backed by Iran and Russia, that have tried to break into election-related systems and have been involved in influence operations in recent weeks,” read the publication.

Chinese investment in Pakistan tops with $402.8m in  7 months