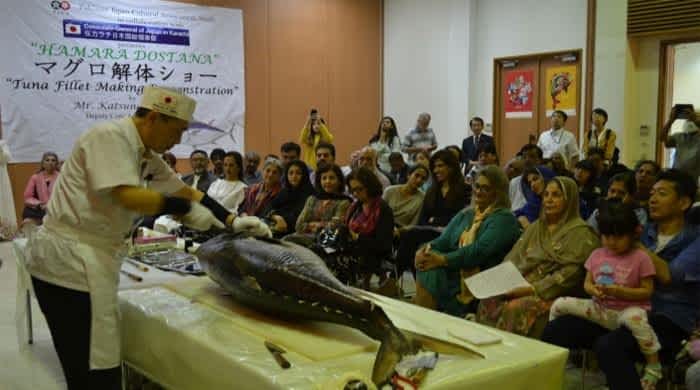 KARACHI: Consulate General of Japan in Karachi and Pakistan Japan Culture Association (PJCA) held ‘Tuna Fillet Making Demonstration’ at the Japan Information and Culture Center under the theme of “HAMARA DOSTANA” on Sunday.

Deputy Consul General, Katsunori Ashida, who himself is an expert in making sushi, showcased his Japanese culinary skills with a step-by-step explanation of slicing and preparing tuna block for sushi and sashimi.

It was only about 150 years ago in Japan that it became common to eat fish that could be considered truly raw.

Before then, fish was sometimes eaten uncooked, but it was salted and/or treated with vinegar to prevent deterioration through bacterial action. After soy sauce became available around the middle of the 16th century, some people would cut up raw fish, dip pieces in the sauce and eat it, but this practice spread to the common folk only around the middle of the 19th century. And actually, eating raw fish only became widespread after World War II, thanks to advances in electrical refrigeration, trucking, and urban sanitation, including garbage removal.

Sashimi and sushi are the best known ways to serve raw fish. The word “sashimi” used to mean any sliced up food, including vegetables and tofu. The food is cut into bite-size pieces, either with the grain or against it, always with the aim of getting the best taste. Sashimi is cuisine made with knives.

Sushi is now popular worldwide. Hand-molded sushi consists of two parts—an easy-to-handle clump of rice seasoned with vinegar, and a topping of raw or cooked seafood. Years ago, sushi developed as a food that was treated to keep it fresh, but today the hand-molded version is rice with some topping. The vinegar is a preservative and helps prevent the ingredients from deteriorating.

Ashida appreciated the fact that the Japanese dishes are gradually emerging in Pakistan and hoped that the local people get a chance to enjoy one of the world’s most renowned cuisine through the demonstration.

UN seeks protection of at least 30pc of planet by 2030