Two exhibitions in New Delhi are just a click away — A World of One’s Own and A Mind of One’s Own at Vadehra Art Gallery | Art & Culture | thenews.com.pk 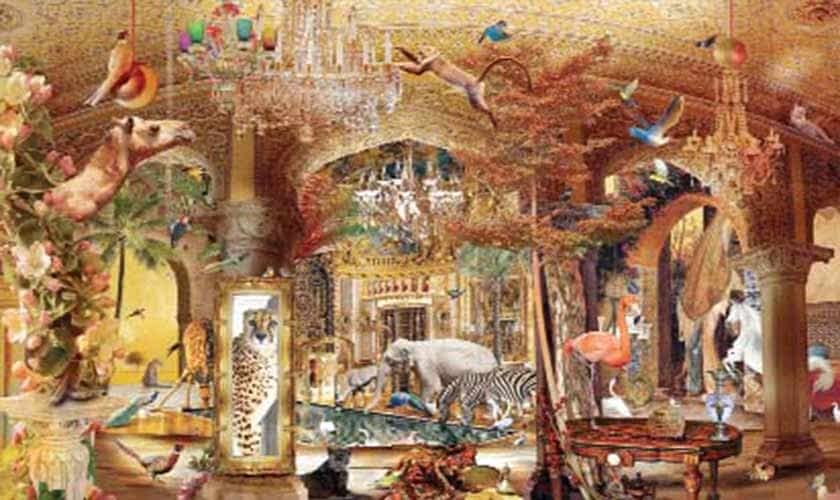 In the current atmosphere, visiting India has become almost impossible for Pakistanis, and vice versa. However, people can now digitally visit anywhere in the world to circumvent the 80 days of pandemic-induced home confinement.

You can be in the neighbouring country by just clicking on a link to an exhibition — actually two exhibitions — at Vadehra Art Gallery. A World of One’s Own and A Mind of One’s Own are being held from June 19 to July 19 at separate locations of the Gallery in New Delhi. Both shows comprise works of important Indian artists of different generations.

All works, though divided into two thematic displays, have a connection. To a certain extent, these deal with landscape: reproductions of what is perceived through eyes or imagination.

Could there be a demarcation between the two? Artists looking at nature do not exactly replicate what they see but create their own view or vision of it. Likewise, what is created out of imagination is rooted in observation.

In a sense, these landscapes (or say mindscapes) remind one of the title of VS Naipaul’s novel The Enigma of Arrival more than the caption of Giorgio de Chirico’s painting that lent the book its name.

Naipaul’s protagonist discovers his English surroundings bit by bit — keenly and fondly. In the pursuit, he constantly recalls his experience of Trinidad; confirming what Octavio Paz said, “In order to really see, one must compare what one is seeing with what one has seen.”

Works from the show A World of Ones Own are diverse interpretations of landscape. Beno de Behari Mukherjee, one of the first students of Kala Bhavan Institute in Shantiniketan, reveals “a deep feeling for nature and an interest in Far Eastern art” in his paintings. In his 1956 watercolour, one can trace an earlier, now almost outdated, practice lingering from the colonial past in which landscape was introduced as a subject by those who arrived from a faraway and different land. The subcontinent never realised its own potential of landscape till it was observed by a foreign eye. This echoes Naipaul’s claim that nature assumes importance only after a painter turns it into a landscape.

Mukherjee follows the mode of delightful discovery of hillsides, coolies, trees, and flowers. In a few of his works, flowers are drawn like documents — reminding one of both English painters’ sketches of India and Mansur’s miniatures of plants and flowers while being part of the entourage of his patron, Emperor Jahangir.

The element of foreignness takes another turn in a watercolour of red blossoms on a branch, rendered like a Chinese painting. Mukherjee, as well as several painters of Bengal School prior to him (including his teacher Nandalal Bose), looked at China and Japan for a common ancestry of Asian art in “the pan-Asian environment of early Kala Bhavan”.

A flower remains a fascination as witnessed in the watercolours of A Ramachandran: a man, in a worm scale/situation, is perched in a cluster of vegetation. It is a way of returning back to nature, or recognising the presence and supremacy of Mother Nature, and almost reverting to the womb.

The power of nature is a pleasure too, as seen in the works of Paramjit Singh where one gets caught between reality and imagination. On one hand his surfaces show vast fields, and on the other these resonate as patterns of musical notes, reverberating on our optical senses; hence denying the link to an actual location.

This enigma marks Singh’s art — giving one a sense of being close to the essence of nature: grand, overwhelming and independent of human control.

Perhaps the most intriguing work in the group show is Islands by Arpita Singh. She has been moulding and modifying reality, so it can depict what we find, feel, and fear to bring to the surface. Her work deals with human conditions. In a playful language, it incorporates the pictorial dialects of children and untrained adults.

Singh redraws a map with split sections of sea and land, hence an island. Along with the outline of the State of Kashmir, one discovers a network of passages, trees, patches of water, boat — all with texts overwritten, and two men lying on the ground.

Despite its luxuriant colours, its inviting and enticing tactile quality, Islands can also be read — as a comment on the current situation. Made in 2018, this oil-on-canvas may be about the conditions in the Valley as politics do invade landscape. You see pictures of peaceful and pretty pastures crowded with bodies of dead humans and animals, or burnt buildings and bushes.

Living in Third World countries, we cannot enjoy the privilege of being liberated from politics: it’s in one’s memory, flesh and thoughts. Whether we write a book, compose music, paint a picture, perform on stage or wear a dress, it is all stained by politics.

In the other exhibition, A Mind of One’s Own, there is a reference to the other landscape — of social and political turmoil, oppression, exploitation and death. Here one comes across substitutes as well – as frightening as reality.

A parallel to reality is presented by Ranbir Kalika in his digital prints — in a world dominated by the animal kingdom but without human existence. Grandiose constructions or dilapidated structures are populated by other species. These digital prints, from 2010 to 2019, strangely, herald the eruption of coronavirus, in which human beings have been reduced to their residenceswhile roads, canals, sea, and sky are the domain of birds and animals. You see pigeons, crows, eagles and other birds but hardly an aeroplane. You notice cats and dogs sauntering but rarely a vehicle.

One can pick other clues to human existence, for instance in the works byPraneet Soi, Anju Dodiya, Gigi Scaria, Atul Bhalla and Nalini Malini; and in the unusual canvases by Sudhir Patwardhan and Atul Dodiya.

In Patwardhan’s paintings, the human body is interacting with nature. Contemplating in Rock; or returning to animistic state in Prowl, Atul Dodiya depicts the ideas of our times with links to history, violence and a bleak future.

In the past, Dodiya has produced works, appropriating Piet Mondrian’s compositions, which referred to the 2001 earthquake in Gujarat. In the current exhibition, you again see Mondrian’s canvas in his painting The Funeral Pyre 1948, in the form of a panel next to the image of a funeral procession (of Gandhi) with the silhouette of a lamenting Nehru. Grey tones of this section coincide with and complement Mondrian’s selective hues. At the same time they assert a world that was simple, ordinate, ordered and is lost.

Both exhibitions at Vadehra Art Gallery are attempts to bring back an unavailable world — either gone or still being conjured up from outside or within us. Seeing the works of different generations of artists at the two venues, the line by Catalan writer JV Foix rings true: “The new excites and the old seduces.”

The author is an art critic based   in Lahore