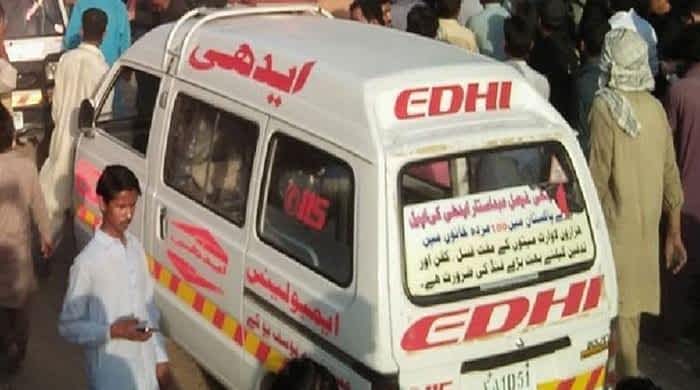 Two horrific accidents — one that occurred in the wee hours of Monday and another at night — left a total of six people dead and three injured in Karachi.

Four friends were killed on University Road after their car rammed into a pedestrian bridge, while two people were killed and three others injured in a multiple vehicle collision after a water tanker’s brakes apparently failed.

Four young friends lost their lives after their speeding car overturned on University Road. The tragic accident took place during the night between Sunday and Monday within the jurisdiction of the Mobina Town police station.

Police said the accident occurred as the driver of the car could not control the vehicle due to high speed and rammed into a pedestrian bridge in a bid to avoid hitting a motorcyclist. The engine and other parts of the car disintegrated because of the intensity of the crash.

Following the accident, ambulances from different welfare organisations reached the scene and transported the casualties to the Jinnah Postgraduate Medical Centre (JPMC), where the deceased were identified as 21-year-old Moiz Akhtar, son of Saleem, Asad, Taimur and Roohan. Moiz was a resident of Nazimabad, while the remaining three lived in Gulshan-e-Iqbal.

A heavy contingent of police officials reached the scene and called a crane to pick up the leftovers of the destroyed car. According to SHO Shahid Taj, the four deceased were friends who had gone out for dinner and to visit another friend of theirs, and the accident took place while they were returning home.

The officer explained that according to witnesses, the car was in high speed when suddenly a motorcyclist entered University Road from a link road and came in front of the car, which resulted in the accident.

All the four youths were students. The funeral prayers for Akhtar were offered in Nazimabad and for the other three youths in Gulshan-e-Iqbal during the day.

Two people were left dead and three others were injured in the Gulshan-e-Iqbal neighbourhood on Monday night after the brakes of a water tanker apparently failed and caused a multiple vehicle collision.

Two people riding a motorbike were killed and three others suffered injuries after the water tanker hit several motorcycles and three other vehicles near the Rab Medical Centre. The deceased were taken to the hospital, where one of them was identified as 28-year-old Amir Qamar. The other victim, however, is yet to be identified.

Police said that Qamar was believed to have been working for a ride-hailing service. They said that they had arrested the cleaner of the water tanker, but the driver, who was identified as Akram, had escaped from the scene of the accident. Citing the cleaner, officials said that the driver had lost control of the water tanker after the brakes of the vehicle failed, following which a multiple vehicle collision occurred.

A man who is yet to be identified died in another road accident that took place near the Natha Khan Flyover at Drigh Road. His body was taken to the JPMC.