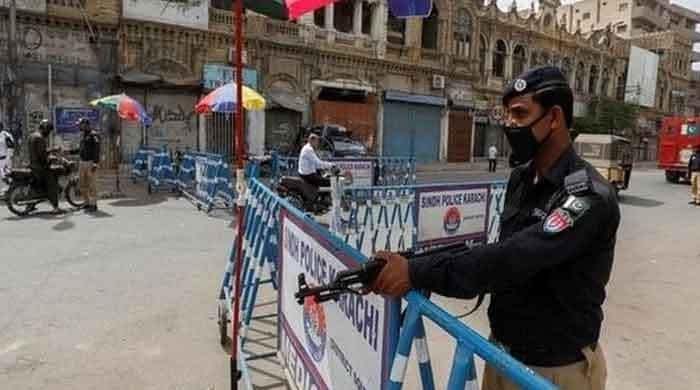 Sindh government officials are considering the option of a lockdown all across Karachi for two weeks, closing all businesses and offices as well as imposing travel restrictions.

The drastic step is being mulled over due to the surge and continuous rise in the numbers of positive Covid-19 cases, people being hospitalised and patients falling critically ill. Officials said that the final decision is expected on Friday (today) morning during the Covid-19 task force meeting with Sindh Chief Minister Syed Murad Ali Shah in chair.

“For the past few weeks, the Covid-19 situation has been getting out of control in Karachi, where the positivity of cases has been rising by two per cent every day,” a Sindh Health Department official told The News on Thursday.

“Most of the city’s Covid-19 beds are occupied now, but over 180 patients are being brought for admission daily. There is no other option left but to impose a complete lockdown in Karachi to control the spread of the disease.”

The official said that due to the rise in Covid-19 cases, mainly due to the Delta variant, Sindh Health Secretary Kazim Jatoi has been calling for a complete lockdown in Karachi for the past couple of weeks.

However, added the official, due to the fear of facing resistance from stakeholders, the provincial government has been reluctant to impose a complete lockdown in the city. A member of Sindh’s Covid-19 task force added that despite recommendations for a long Eidul Azha holiday, the federal government opposed closing businesses in the country.

“So, the provincial government couldn’t dare take such a decision, but at the moment, no other option is left except a lockdown to bring the number of cases down.” The member said that the final decision about imposing a lockdown in the city will be taken at 11am today, adding that medical experts in the task force and health department officials have also recommended a 14-day complete lockdown in the city, where over 360 patients have been hospitalised in just two days.

“Hospitals are nearing a saturation point with cases in Karachi rising rapidly,” said the member, adding that the provincial government is consulting with stakeholders on the lockdown option, while the Pakistan Medical Association has already demanded a complete lockdown in Sindh.

Forty-four more people have died due to Covid-19 and 2,797 others have tested positive for the disease during the past 24 hours in Sindh, with the death toll due to the viral coronavirus infection reaching 5,947 in the province.

Chief Minister Syed Murad Ali Shah said in his daily situation report on the health emergency on Thursday that 20,475 samples were tested in the past 24 hours, resulting in 2,797 people, or 14 per cent of those who were screened, being diagnosed with Covid-19.

The provincial government has so far conducted 4,968,347 tests, which have resulted in 377,214 positive cases, which means that eight per cent of those screened have been found to be infected, he added.

Shah said that after the latest deaths, the rate of the diagnosed people who have lost their fight with Covid-19 stands at two per cent in Sindh. He said that 39,958 people across the province are currently infected: 38,503 are in self-isolation at home, 45 at isolation centres and 1,410 at hospitals, while 1,192 patients are in critical condition, of whom 102 are on life support.

He added that 473 more people have recovered during the past 24 hours, increasing the number of cured patients to 331,309, which shows the recovery rate to be 87.8 per cent. The CM said that out of the 2,797 fresh cases of Sindh, 1,796 (or 64.2 per cent) have been reported in Karachi Division: 558 of the city’s new patients are from District East, 466 from District Central, 425 from District South, 210 from District Korangi, 88 from District Malir and 49 from District West.

As for the other districts of the province, Hyderabad has reported 162 new cases, Badin 60, Mirpurkhas and Shaheed Benazirabad eight each, Dadu nine, Ghotki, Kashmore and Khairpur four each, Sujawal, Thatta and Sukkur three each, Larkana, Sanghar, Shikarpur, Umerkot and Naushehroferoze two each, and Jacobabad, Matiari, Tando Allahyar, Tharparkar and Jamshoro one each, he added.

The chief executive reiterated his appeal to the people of Sindh that they should comply with the standard operating procedures devised by his provincial government.