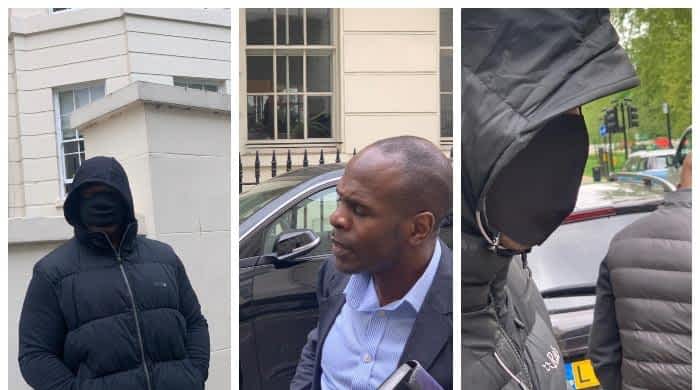 Of the four men, three were wearing masks and hoodies to conceal their identity whilst the fourth man was wearing a suit and wore no mask.

The men in the suit told Hasan Nawaz Sharif at the entrance of the office that he had an appointment with Nawaz Sharif and wanted to discuss an important matter with him.

When told that Nawaz Sharif was inside the building, the man in the suit said that he was aware that he was inside and insisted that he had an appointment. At that point, the masked men forced their way in.

From inside the office, around four PML-N workers went outside and confronted the four men. From the footage released to media, Nasir Butt, Hasan Nawaz and other PML-N members are seen speaking to the four men. When asked about their identity, they refused to show anything and said that they wanted to convey a message to Nawaz Sharif and it was of urgent nature. The four men came in a car, bearing registration number RE58NCJ.

The Metropolitan Police said that a criminal case has been registered under CAD No: 477320May2021 and they are looking into the complaint.

A spokesman of the Sharif family said that the police has been requested to arrest the men and question them about false impersonation and attempting to enter into the private property seeking to harm the former premier who has been living in London for the last 18 months now after coming to London for medical treatment.

Before the pandemic, a group of masked men had protested outside Nawaz Sharif’s residence soon after the Gujranwala speech. The police had stepped up security around Nawaz Sharif’s house on Park Lane after Dr Adnan Khan was attacked during his evening walk.