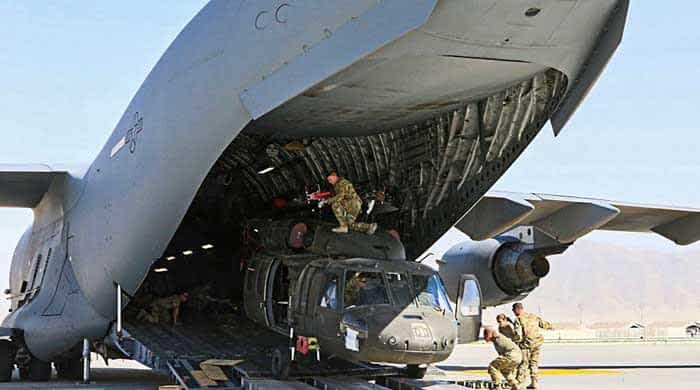 US forces transporting military hardware from Bagram Air Base. -AFP

The Pentagon on Tuesday admitted it had vacated the Bagram air base in Afghanistan secretly, without informing the Afghanistan government.

According to reports, Afghan military officials, including the general who will run the base in the future, complained that they were not told in advance that US forces would leave in the early hours last Friday.

Pentagon spokesman John Kirby said senior Afghan political and military officials were told about the exit two days ahead and were given a walk-through of the sprawling base, the center of US and coalition operations against Al-Qaeda and the Taliban resistance for the past two decades.

“The exact hour of departure was not divulged for operational security purposes,” Kirby said in a press briefing.

“In general we felt it was better to keep that information as closely held as possible,” he added.

The US withdrawal must be “safe and orderly,” Kirby said, pointing to the constant threat the Taliban poses to US forces.

“I can´t speak to how the Afghans interpreted that decision,” he added, amid questions of whether it showed a fundamental distrust of US partner forces in the country.

“It’s not a statement about whether we trust or don’t trust our Afghan partners. It’s a statement of the fact that we have to consider that this drawdown could be contested by the Taliban. And we have to take that into consideration.”

“It was a turnover just like the previous six bases were turned over,” he went on.

The United States has moved quickly to pull out thousands of service personnel and civilian contractors since President Joe Biden ordered them to leave in April, setting a September deadline.

On Tuesday the US Central Command, which oversees Afghan operations, said the pullout was more than 90% complete.