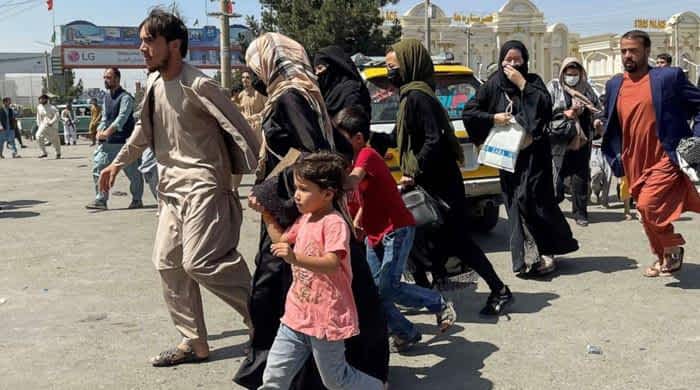 KABUL: The emergency airlift from Kabul of both foreign nationals and Afghans who worked with them is gathering pace as more detail of the desperation and fear driving the rescues emerges.

Here is a round-up of the latest developments:

US President Joe Biden said Friday he could not guarantee the outcome of emergency evacuations from Kabul, calling it one of the most difficult airlift operations ever.

“This is one of the largest, most difficult airlifts in history,” Biden said in a televised address from the White House, adding that the US had evacuated more than 13,000 people.

“I cannot promise what the final outcome will be, or… that it will be without risk of loss.

“But as commander in chief, I can assure you that I will mobilize every resource necessary” to conduct a thorough evacuation.

Access to the Kabul airport is proving a “big challenge” for foreigners and vulnerable Afghans fleeing the Taliban takeover, warned NATO chief Jens Stoltenberg, who called on the hardline Islamists to let Afghans leave the country.

“We have more planes than we have people or passengers because the process of getting people — especially Afghans — into the airport and processed is now the big, big challenge,” he said.

More than 1,600 people have been brought to safety so far by German armed forces from the Afghan capital, German government spokeswoman Ulrike Demmer said.

A German civilian was wounded by gunfire on his way to the airport, though his life is not in danger and he is to be flown out of Kabul soon, she added.

The German government is planning to deploy two helicopters to support the evacuations, including from “dangerous situations” or to pick people up from remote locations.

The UK said it has evacuated 1,615 people since Saturday — including 399 British nationals and their dependants, 320 embassy staff, and 402 Afghans.

A Spanish commercial plane carrying 110 people — mainly Afghans who worked for the Spanish embassy in Kabul and their families — landed in Madrid Friday afternoon, the government said.

But defence minister Margarita Robles said on the radio Friday that one family “lost their daughter in the press of people” as they were boarding the plane, meaning “she stayed in Kabul”.

The case showed that “the situation at Kabul airport is simply dramatic,” Robles added.

Spain’s airbase at Torrejon de Ardoz can house around 1,000 people and will be a hub for Afghan refugees being taken in by EU member states.

Switzerland said it would send a plane to the Uzbek capital Tashkent on Saturday to repatriate Swiss and other evacuees from Kabul.

It would deliver 1.3 million anti-Covid masks, the foreign ministry said.

Italy said it had evacuated around 1,000 people while more were still waiting at the airport in Kabul.

Some 103 Afghans were due to arrive on Friday night at Rome’s Fiumicino airport on a charter plane from Kuwait made available by Italian non-profit Nove Onlus, it said.

Finland said Thursday it had so far evacuated 34 people, with more Afghan local staff now inside the airport ready to be flown out.

Denmark evacuated around 320 people from Kabul on Thursday, according to the Danish defence and foreign ministers.

Dutch Foreign Minister Sigrid Kaag said a plane with around 180 people aboard is due in the Netherlands later Friday, without giving a breakdown of nationalities.

Kaag said 700 Dutch nationals are still in Afghanistan needing evacuation. The number does not include Afghans who worked for the Netherlands and must be evacuated.

A Czech army pilot returning from Kabul recalls how there was barely any air traffic control, no refuelling and take-offs “at own risk” in the escape from Afghan capital.

Identified only as “Major M M” on the Czech defence ministry website that published his account of the flight, the pilot brought 62 people to Prague from Kabul on Wednesday.

“I have done a few non-traditional flights, but this one was demanding and damn long,” the pilot, who joined the armed forces 20 years ago, said Thursday.

His Airbus carried Czech soldiers, Afghan interpreters and their families, as well as four Afghans whose return had been requested by neighbouring Slovakia.

The United States has airlifted out of Afghanistan some 7,000 people since August 14 and says the Taliban appear to be cooperating with evacuation efforts from Kabul airport.

Major General Hank Taylor said Thursday that the pace of evacuations had accelerated despite reports of the Taliban continuing to impede people trying to access the airport.

An Afghan footballer who played for the national youth team fell to his death after trying to cling to a departing US plane, the country’s sports authority said.

It confirmed the death of Zaki Anwari in the mayhem that erupted at the airport.

A GoFundMe campaign to raise money for the evacuation of 300 vulnerable Afghans fleeing the Taliban has raised over $6 million, according to figures published Thursday.

The creator of the fundraising page, New York-based Tommy Marcus, asked for funds to organize flights out for Afghans who risk being targeted by the Taliban.

2 Pakistan Army sepoys martyred in exchange of fire with militants from across Afghan border: ISPR