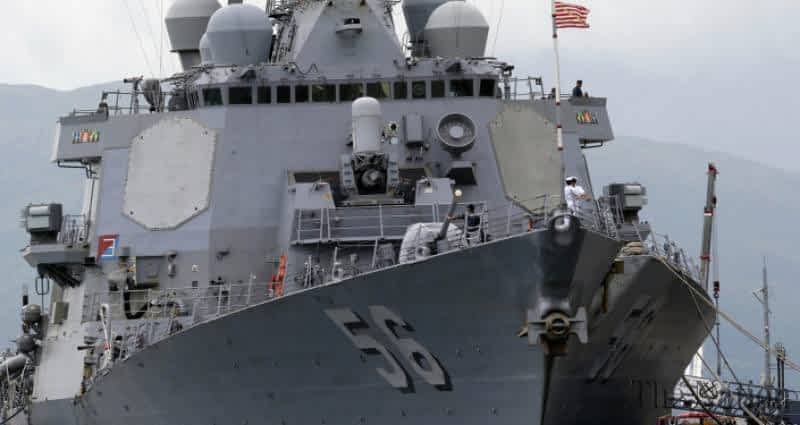 China’s new aircraft carrier, Shandong, is also on its way to the South China Sea for military drills. The warship was spotted near Hainan on Tuesday and is reported to be carrying a new squadron of J-15 fighters.

For the second time in a week, a US Navy warship purposefully flouted China’s nautical claims by sailing directly through the waterway in question.

On Tuesday, the US Seventh Fleet announced the Arleigh Burke-class destroyer USS John S. McCain had “asserted navigational rights and freedoms in the Spratly Islands, consistent with international law.” The statement made no mention of which island or islands the McCain sailed past or how close the warship came to land.

According to the Navy, the operation was directed at all nations with maritime claims in the South China Sea, including Vietnam, Taiwan and China. As Sputnik previously reported, all three nations have engaged in land reclamation efforts and military fortification of islands in the Spratly Island chain; however, Malaysia, Brunei and the Philippines have also laid claim to some of the Spratlys.

The tiny islands sit atop coral reefs in the eastern South China Sea and are believed to be surrounded by a seafloor rich in petroleum deposits. Earlier this year, the US State Department issued a statement rejecting China’s claims over sea lanes around the islands, but did not directly dispute Beijing’s claims on the islands themselves. That said, Washington has also sanctioned people connected to Chinese activities on the islands.

Tian further blasted Washington’s violation of Chinese sovereignty and security and accused it of gravely undermining peace and stability in the South China Sea.

The USS McCain previously performed a “freedom of navigation operation” (FONOP) in Russia’s Peter the Great Gulf in late November. The US ship sailed several kilometers inside the straight baseline established by Moscow in 1984, as Washington argued Moscow had claimed too much of the waterway as its own.

Tuesday’s FONOP wasn’t the only such operation this week, either: on December 19, the US Navy destroyer USS Mustin sailed through the Taiwan Strait, a waterway regarded by Beijing as its own, since it does not recognize the Republic of China government on Taiwan and claims sovereignty over all Chinese territory, including Taiwan. Technically, the US agrees, since it agreed to switch diplomatic recognition from Taipei to Beijing in 1979, but in practice the US does much to support the Taiwanese government politically and militarily.

Beijing accused the US of sending “flirtatious glances” at pro-independence forces in Taiwan with the maneuver, and said it was “jeopardizing peace and stability in the strait.” It was the 12th time a US warship had sailed through the Taiwan Strait in 2020.

Last week, the Pentagon released a new maritime strategy document titled “Advantage at Sea” outlining how the US Navy, Marine Corps and Coast Guard can maintain US naval supremacy through the 2020s.

Calling China “the most pressing, long-term strategic threat” and “the only rival with the combined economic and military potential to present a long term, comprehensive challenge to the US,” the document calls for the naval services to “accept calculated tactical risks and adopt a more assertive posture” in their “day-to-day operations.”

Indian army will always get 'befitting response' to any aggression, says COAS during LoC visit