US reports below 1,000 daily coronavirus death toll for first time in months 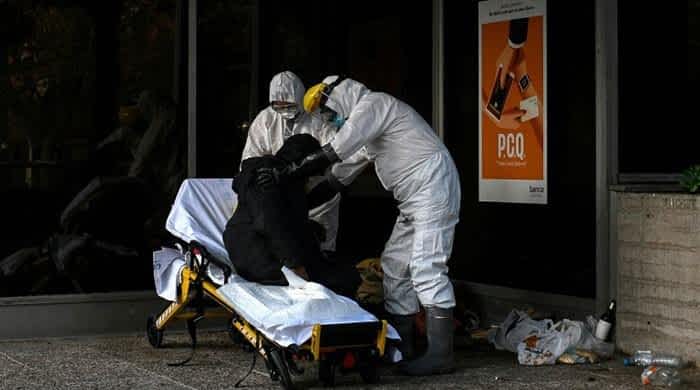 According to data issued by Johns Hopkins University, in 24 hours, 749 people died from the coronavirus, far below the peak of 4,473 deaths recorded on January 12. Photo: AFP/File

WASHINGTON:  For the first time in months,  the United States reported fewer than 1,000 deaths in a day from coronavirus on Monday.

According to data issued by Johns Hopkins University, in 24 hours, 749 people died from the coronavirus, far below the peak of 4,473 deaths recorded on January 12.

The daily US death toll has not been below the thousand marks since November 29, when 822 people died in a 24-hour period.

That indicates that the slowdown in the epidemic is continuing in the United States, where infection rates and deaths have fallen to similar levels as before Halloween, Thanksgiving, and other end-of-year holidays that were marked by travel and larger gatherings that boosted the spread of the virus.

The slowdown is good news for President Joe Biden, whose colossal $1.9 trillion aid plan successfully passed the Senate on Saturday, and will bolster his large-scale vaccination strategy.

The US vaccine campaign launched in December is now in full swing, with nearly 10% of the American population — about 31.5 million people — having received either the two shots necessary for the Pfizer or Moderna vaccines or the single shot in the case of the Johnson & Johnson vaccine.

Health authorities added to the cautious optimism Monday when they announced that vaccinated people could meet together in small groups indoors without wearing masks or the need for social distancing.

However, they must continue to respect these precautionary measures in the presence of unvaccinated people and in public spaces.