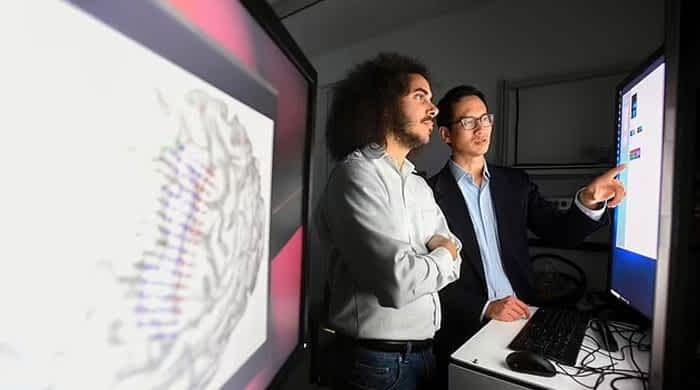 WASHINGTON: In a world first, US researchers have developed a neuroprosthetic device that successfully translated the brain waves of a paralyzed man into complete sentences, according to a scientific paper published Thursday.

“This is an important technological milestone for a person who cannot communicate naturally,” said David Moses, a postdoctoral engineer at the University of California San Francisco (UCSF), and one of the lead authors of the study in the New England Journal of Medicine.

“It demonstrates the potential for this approach to give a voice to people with severe paralysis and speech loss.”

The breakthrough involved a 36-year-old man who had a stroke when he was 20 that left him with anarthria — the inability to speak intelligibly, though his cognitive function had remained intact.

Every year, thousands of people lose the ability to talk due to strokes, accidents or disease.

Past research in this area has focused on reading brain waves via electrodes to develop mobility prosthetics that allow users to spell out letters.

The new approach was intended to enable more rapid and organic communication.

UCSF researchers had previously placed electrode arrays on patients with normal speech who were undergoing brain surgery, to decode the signals that control the vocal tract in order to express vowels and consonants, and were able to analyze the patterns to predict words.

But the concept hadn´t been tried out on a paralyzed patient to prove it could offer clinical benefit.

The team decided to launch a new study called Brain-Computer Interface Restoration of Arm and Voice, and the first participant asked to be referred to as BRAVO1.

Since suffering a devastating brainstem stroke, BRAVO1 has had extremely limited head, neck, and limb movements, and communicates by using a pointer attached to a baseball cap to poke letters on a screen.

The researchers worked with BRAVO1 to develop a 50-word vocabulary with words essential to his daily life like “water,” “family,” and “good,” then surgically implanted a high-density electrode over his speech motor cortex.

Over the next several months, the team recorded his neural activity as he attempted to say the 50 words, and used artificial intelligence to distinguish subtle patterns in the data and tie them to words.

To test it had worked, they presented him with sentences constructed from the vocabulary set, and recorded the results on a screen.

They then prompted him with questions like “How are you today?” and “Would you like some water?” which he was able to answer with responses like, “I am very good,” and “No, I am not thirsty.”

The system decoded up to 18 words per minute with a median accuracy of 75 percent. An “auto-correct” function, similar to that used in phones, contributed to its success.

“To our knowledge, this is the first successful demonstration of direct decoding of full words from the brain activity of someone who is paralyzed and cannot speak,” said BRAVO1´s neurosurgeon Edward Chang, a co-author.

An accompanying editorial in the journal hailed the development as “a feat of neuroengineering,” and suggested advancements in technology such as smaller surface electrodes might help improve accuracy even further.

Over 1,100 test positive for Covid in Karachi in a single day