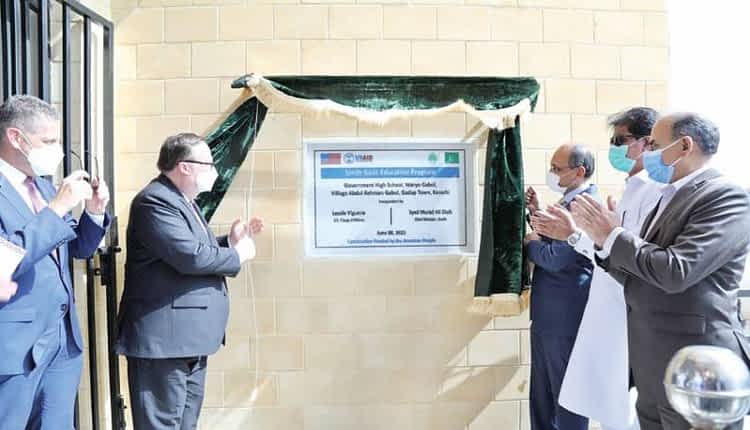 KARACHI   –  United States, through the United States Agency for International Development (USAID), and the Government of Sindh inaugurated a new high school in Karachi.

The construction of this school is part of the Sindh Basic Education Program (SBEP), under which USAID is supporting the construction of 106 schools across 10 districts in Sindh.  U.S. Embassy Chargé d’affaires a.i. Lesslie Viguerie and Sindh Education Minister Saeed Ghani participated in the inauguration ceremony.

“We believe that true and lasting development, for countries as well as individuals, starts with education,” Chargé d’affaires Viguerie said. “The United States and Pakistan share this belief, and that is why we are committed to expanding our cooperation in education – from primary to post-graduate levels – to further this common goal.” Education Minister Ghani expressed his appreciation for the U.S. government’s support in modernising education in Sindh through the province’s ongoing partnership with USAID. Through SBEP, USAID has invested $159.2 million (PKR 25 billion) in school construction in Sindh. Acting Consul General Jack Hillmeyer, and USAID Director for Sindh and Balochistan James Parys also participated in the ceremony along with community elders, teachers, students, and parents.