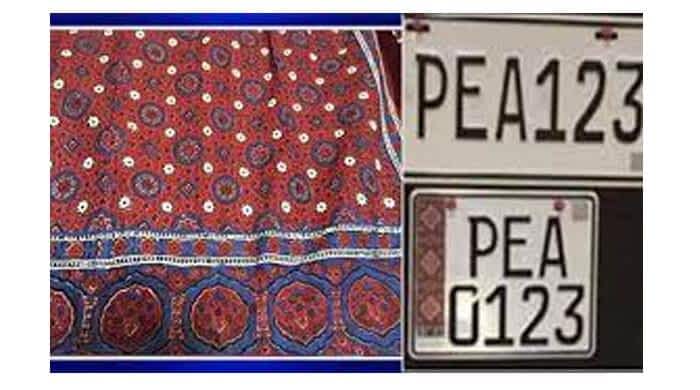 The Sindh Assembly was informed on Monday that anyone using a vehicular registration number plate having the design of Ajrak was doing an illegal act. This was stated by Sindh Excise and Taxation Minister Mukesh Kumar Chawla while responding to queries of legislators during question hour of the session.

The excise and taxation minister gave information to this effect to the concerned lawmakers in the context of the long-delayed project of the Sindh government to launch new registration number plates for motor vehicles having special security features.

However, the proposed new number plates, whose images were released by Sindh government after the plan was finalised, contained the design of Ajrak on a portion of it.

Chawla informed the Sindh Assembly that certain people on their own had affixed to their vehicles new registration number plates with the Ajrak design without authorisation as such vehicles were now roaming around.

He admitted that the provincial government had been planning to introduce the new vehicular plates since 2008 but a stay order in this regard had delayed the process. Shah told the House that new registration plates would be introduced in the province by December this year as the provincial cabinet had also approved the plan.

The excise and taxation minister also informed the house that no licence was issued by the Sindh government to allow anyone to do the illegal business of homemade poisonous liquor. He clarified that the alcohol sold by the registered liquor companies in the province was not poisonous. He maintained that no person involved in the business of home-made toxic liquor in the province carried the provincial government’s licence. He added that proper criminal cases were registered against the elements involved in the selling of home-made liquor.

To a question, he said the provincial law did not allow setting up of a licensed liquor ship nearby the location of any school. He added that only non-Muslims were eligible to apply for getting the licence to do liquor business in Sindh.

Chawla said that 8,000 personnel were available with his department and orders were instantly issued whenever any place was identified as the location of a home-made poisonous liquor business.

The lone opposition legislator of the Muttahida Majlis-e-Amal, Syed Abdul Rasheed, said that a common citizen of Karachi knew well where the home-made liquor was being sold in the city. Meanwhile, Parliamentary Secretary for Sindh Local Government Department Saleem Baloch informed the House that the Sindh government had made full preparations to deal with any emergency civic situation in Karachi as a result of the heavy monsoon rains in the current season.

He stated that work was in progress to de-silt 44 major storm water drains in the city whose administrative control was with the Karachi Metropolitan Corporation. He said that so far 50,000 tons of municipal waste had been lifted from these drains during the ongoing sanitation campaign.

He added that heavy machinery along with 10,000 people had been deployed to carry out the de-silting operation to clear the network of storm water drains.

The parliamentary secretary was responding to a call-attention notice of Pakistan Tehreek-e-Insaf MPA Jamal Siddiqui who disclosed in the House that the Pakistan Meteorological Department had predicated torrential monsoon rains this year.

Meanwhile, Speaker Agha Siraj Khan Durrani informed the House that the Sindh Assembly had met the constitutional requirement of remaining in session for 100 days during a parliamentary year.

He greeted all the legislators for the latest achievement of the provincial legislature saying that running the House during the coronavirus health emergency was a difficult task. He expressed gratitude to all the lawmakers in the house for extending cooperation in this regard.