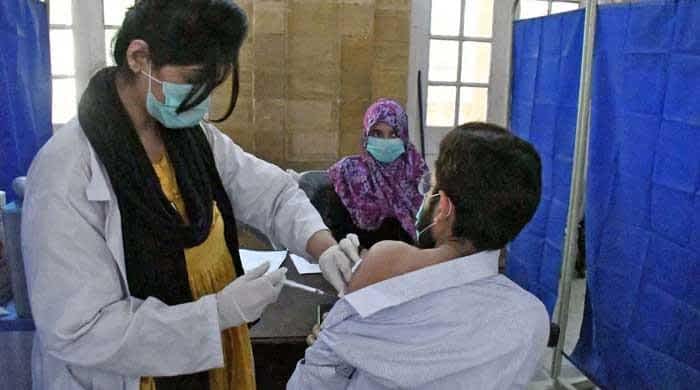 LAHORE: The University of Health Sciences (UHS) on Monday launched a public survey to analyse various trends in vaccination against Covid-19.

“Whether one received multiple jabs of the same vaccine or mix-and-match, the PolyVac Tracker invites individuals (particularly the vaccinated ones) to partake in the simple anonymous survey aimed at recording and sharing self-reported vaccination and post-vaccination experiences”, said UHS Vice-Chancellor Professor Javed Akram while addressing a press conference.

Professor Javed Akram said the ongoing pandemic continued to challenge lifestyles and systems. He opined the prolonged use of vaccines under Emergency Use Authorisation (EUA) coupled with an emergency of mutations and variants warranted attention so that the highest standards of health and safety were ensured. “With fast-changing clinical and public-health scenarios, scientific information-sharing and researching are more pressing than ever before”, he maintained.

The UHS VC said that mixing COVID-19 vaccines was emerging as a way to get people the protection they needed when faced with safety concerns and unpredictable supplies.

“We as scientists still want answers on real-world efficacy and possible side-effects”, he said and added the results of the survey would give researchers confidence that combining other COVID-19 vaccines, that haven’t yet been tested together, might also work. Professor Javed Akram lamented that the vaccination process was not as active in the country as it should be.

“Eighty percent of the population must be vaccinated for which the vaccination program needs to be stepped up”, he emphasised. UHS VC categorically said there was no moral justification for giving VVIPs a third booster dose of the vaccine whereas the majority had not received their first one so far.

Professor Javed Akram said that VVIPs were trying to get all kinds of vaccines. However, it remained to be seen whether there was any benefit to having more than one type of vaccine, he said and that 5 to 7 lakh people, mostly from the upper socioeconomic class in Pakistan, had been vaccinated with more than one type of vaccine. The PolyVac Tracker survey would show whether the vaccine mix-and-match benefits orharms, he said. He said the survey form was available on the UHS website. The link is http: //bit.ly.PolyVacUHS. He appealed to the media to spread this link to as many people as possible so that the data of at least 500,000 people could be analysed as per the target.

Dr Shehnoor Azhar, Focal Person of UHS Vaccine Trial, gave a briefing on the Polyweek Tracker Survey. Responding to media queries, Prof Javed Akram said that he appealed to people not to get tested for antibodies after vaccination as there was no point in getting tested.

“It will only benefit the laboratories that have already earned millions”, he said. He added that there could be 39,000 mutations in the coronavirus. No corona vaccine had been registered for commercial use. So far, all vaccines had been approved for emergency use, Prof Javed Akram said and added vaccines were being made an economic war.

“US officials are spreading propaganda against the Chinese vaccine. The fact is that Chinese vaccines are quite effective against the virus”, he maintained. In response to a question, he said no vaccine was 100 pc effective against coronavirus. All vaccines provided 95 to 100 pc protection against severe illness. Professor Javed Akram said that the trend of vaccine shopping was not healthy and must be discouraged.