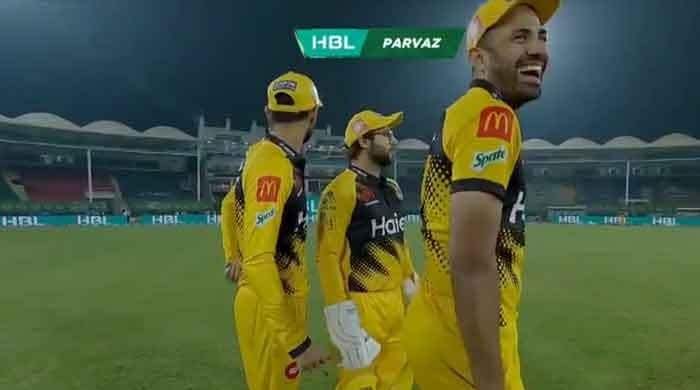 It was an exciting clash between the Zalmis and the Qalandars with the latter clinching an exciting win at the end of the game.

However, Mohammad Hafeez’s innings was not the only highlight of the match. Ramiz Raja interrupted a team huddle comprising Wahab, Malik and Imam. Needless to say, hilarious banter followed.

“Guys, what are you talking about? Can you hear us?” asked Ramiz as the three Zalmi stars chatted.

“Yes, Ramiz bhai. We are trying to make sure he [Imam] becomes a good wicketkeeper,” replied Wahab, making Ramiz laugh.

Malik intervened at that point with a witty comment.

“You know the catch that went high up in the air, Ramiz bhai? I told him to take off the [wicketkeeping] gloves and take it [with his bare hands],” chirped Malik.

“I didn’t have time to do that. By that time, the ball came down [for the catch],” said Imam.

“Guys, tell me. Can’t you time-out Hafeez?” asked Ramiz, referring to the Qalandars batsman who had gone for a washroom break.

“These things are very necessary for him, Ramiz bhai,” said Wahab, inducing another round of hysterical laughter from the commentator as the camera turned towards Hafeez, who was seen running back to take his place at the crease.

Hafeez wins it for the Qalandars

Lahore Qalandars had beaten Peshawar Zalmi by five wickets in the Eliminator 1 of the PSL 2020.

The best innings of Mohammad Hafeez’s PSL career was instrumental in a Lahore Qalandars run chase that at one point was on the verge of a meltdown with Lahore 33-3.

Hafeez formed a crucial partnership with Ben Dunk, then Samit Patel and lastly with David Wiese but most importantly, stayed till the end to ensure that his team got home.

With the victory, the Qalandars stay alive and will face Multan Sultans for a place in the final opposite Karachi Kings.

Zalmi, meanwhile, were knocked out of the tournament with the defeat.