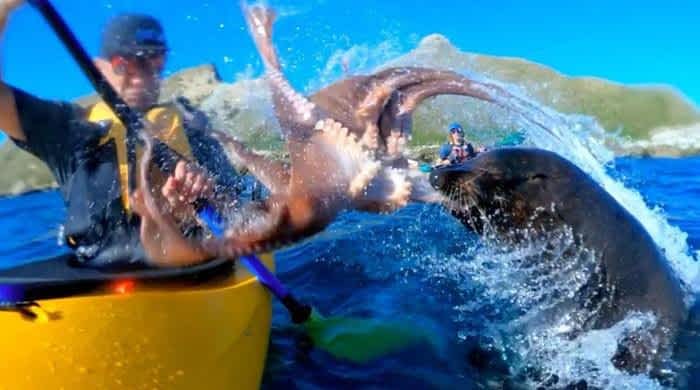 WELLINGTON: Remarkable footage of the moment a New Zealand fur seal slaps a stunned kayaker in the face with an octopus has gone viral.

Kyle Mulinder was paddling off the South Island town of Kaikoura over the weekend when he inadvertently became entangled in a battle between a bull seal and the octopus it wanted for lunch.

As the seal tried to finish off the unfortunate cephalopod, shaking its jaws vigorously, Mulinder copped an eight-legged slap in the kisser.

Mulinder´s companion Taiyo Masuda was testing out a new GoPro camera at the time and captured the entire incident.

“One seal swims right next to us, having an octopus in his mouth, pops right up of the surface next to us, then tries to chew up the leg but ended up slapping our face,” Masuda told AFP.

The video shows Mulinder yelling “there´s an octopus on my boat” with Masuda responding “no way, that was mental”.

“It was super funny rather than terrifying, we cracked up straight away,” he said.

“I´d say we´re active outdoor types but I´ve never seen anything like that in the wild before.

“I can see the GIF doing the rounds for a long time.”

Kaikoura is the site of a large colony of New Zealand fur seals.

Johnson & Johnson applies for EU approval of its vaccine