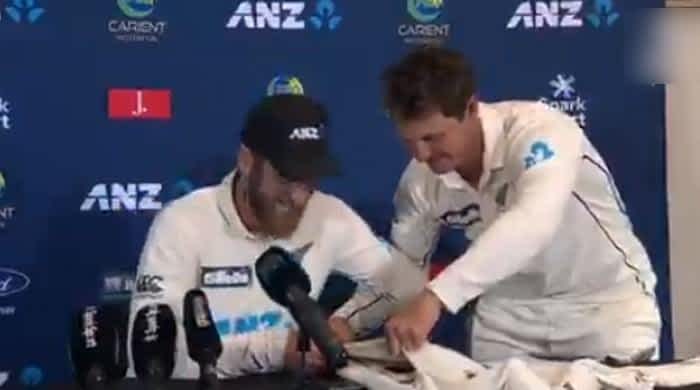 New Zealand captain Kane Williamson has been in the news following his team’s splendid performance during the Test series against Pakistan.

Although the Kiwi skipper has fans across the world, today he found a new fan, who interrupted his post-match press conference.

Williamson’s teammate and wicketkeeper-batsman BJ Watling interrupted the media briefing after the Kiwis completed the series against Pakistan, to ask him for an autograph.

“What’s going on?” Williamson asked as he looked confused momentarily.

Then in came Walting, who said: “Sorry, big fan,” as he handed him a pen and a jersey to sign.

New Zealand thrashed Pakistan by an innings and 176 runs to go 2-0 up in the Test series. Pakistan got bowled out for a hapless 186 runs in the second innings, totally outclassed by Kyle Jamieson and Trent Boult’s pace attack.

The 30-year-old Williamson is counted among the best batsmen around the world in all three formats of the game. He has played 83 Test matches and scored 7,115 runs at an impressive average of 54.31 runs per match.

The New Zealand skipper has hit 24 centuries so far and scored 32 half-centuries.