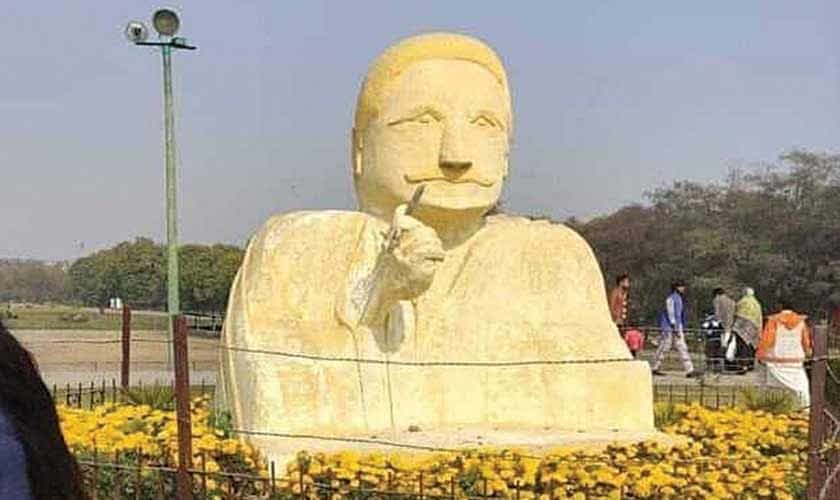 Public monuments and sculptures are a tough job for artists. The recent installation of a sculpture of Allama Muhammad Iqbal at Lahore’s Gulshan-i-Iqbal Park, sparked a debate among the art fraternity and rattled many social media users. Many artists have also raised their voice against the eventual removal of the sculpture.

Salima Hashmi, an art critic, art educator and artist, has called it a heinous act that left her in a shock. “The same city put Manto on trial. It is the same [kind of] people who bashed and removed the sculpture. To me, they are pseudo experts; people who like a particular kind of public art. There was an outcry in the media. Is there only one kind of portrayal? Who gets to decide what is good or bad art?”

She says the sculpture was apparently made by untrained people. “They must have been told by someone to make it and they did it. It was a charming piece of work and looked folk urban. They made it from a photograph. I was quite moved. There are various philosophies in the arts but you can’t debate with these so-called experts because they have never studied it. They are self-styled experts. The whole Egyptian art is based on similar depiction. There was affection and it came out very strong.”

“People who decided to remove the sculpture did not bother to consult an expert. Apologies, but there are no good public sculptures in Pakistan any way. We have not produced [great] sculptors… only people who can copy. This sculpture looked authentic and people should have appreciated it. I’m willing to stand for it and will raise my voice at an academic level. Shakir Ali would have made the same kind of sculpture I bet… They would have destroyed it anyway, [after] criticising the proportions. People raised similar objection on Shakir Ali’s art.”

Amin Gulgee, the sculptor and painter, sees the matter in a different light. “How did the sculpture get there [in the park] in the first place? If it was allowed to be there, then they should not have removed it. There must be a procedure to follow before installing anything in a public park. I would like to know how this happened. We are not debating whether the piece was good or bad. The point is how did it materialise? You cannot just go and put anything in a public space. Somebody has to approve it. There is a procedure. You cannot do whatever you want.”

“As a piece, it was wonderful. However, you cannot advertise anything anywhere in this way. This has to be addressed in our country which has not been happening. It takes a lot of money and effort to complete such a huge sculpture. Who told the gardeners to make this sculpture? If they were asked to make it, then it should not have been removed.”

Artist Abbas Kamangar says: “The administrators should be held accountable. The resemblance is missing. That is why it became the talk of the town and a joke. There is a possibility that it was created by someone else and the gardeners were only asked to take the blame. It would have alright to place it in Karachi biennale, because it would then have been done by somebody holding a degree in fine arts. They would have been able to justify it. You can’t expect a gardener to do that. Even if it was motivated by an affection for a public hero you, you can’t just put anything anywhere. I think there is another side to the story that which we don’t know about.”

Ajab Khan, who has made many portraits of Allama Iqbal, is critical of the sculpture. “I strongly condemn this mockery of Allama Iqbal. If we had no sculptors around, then it would have been another matter. However, we do have a long list of sculptors who could have done a great job. I am sure there’s been corruption… I am highly against this sculpture as it makes no sense. Some people, when they fail at something, call it modern or contemporary art. This is highly unfair to the arts.”

Nilofur Farrukh, art critic, trustee and CEO of KBT, says that art presented in any form should be acceptable. “The KBT offers an opportunity to all artists… Let us broaden the art umbrella further… We might have not produced many sculptors, but we do have some who are amazingly talented and true to their work. This incident gives us an opportunity… We should start making sculptures of our national heroes that the county has never thought about. As it is, we probably know only half of the story and the truth appears to have been brushed under the carpet. As an art piece, it looks interesting… We need to know complete details… One cannot just remove anything from a public space without reaching a conclusion about what caused a frenzy.”

Fawzia Naqvi, editor-in-chief of Art Now Pakistan, says: “Any art piece should be appreciated. If it was installed in the first place after receiving the permissions and meeting the regulations, then it should have stayed there. Public art makes a difference. The fact is that it has become a talking point and attention has been drawn to it. I strongly believe that the statue should have been allowed to remain there.”

Qudsia Rahim, the executive director of the Lahore Biennale Foundation says: “I think this incident has raised some important questions: what is good art and according to whom? The biggest damage that I saw was censoring of innocent imagination by a mob mentality. Most of the people had not seen the artwork. As a community we should take social media justice more seriously. As for art and artists, it was a perfect example of urban folk or naïve art. Since most scholars and academics are not on social media, it took us some time to respond. The damage had already been done. This kind of art cannot be remade or re-commissioned. Bravo to the gardeners.”

Nausheen Saeed, a sculptor and assistant professor at the National College of Arts, says: “Why have they removed it? I can’t understand. What was it portraying? What was the vision behind it? We blindly follow an imposed perception of beauty and proportion. I fail to understand why it is important that the hand should make a logical connection with the body in a sculpture that is just an expression. That expression is an epitome of poetry and philosophy.”

Maheen Aziz is an art,   culture and entertainment journalist from Karachi, she can be reached at [email protected]